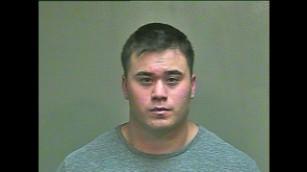 (CNN)One of the women assaulted by former Oklahoma City police officer Daniel Holtzclaw said she feared for her life when he pulled her over and forced her to perform a sex act on him.

"In my mind, all I could think of was he was going to shoot me, he was going to kill me," the woman told reporters at a news conference Friday. "I kept pleading, 'Don't make me do this, sir.'

"All I could see was my life flashing before my eyes and the holster on his side," she said.

Holtzclaw told her he wasn't going to kill her but he made her perform oral sodomy, she said.

She was one of two victims who addressed the media a day after a jury found Holtzclaw guilty of 18 of the 36 charges he faced, including four counts of rape in the first degree and four counts of forced oral sodomy.

The jury deliberated for more than 40 hours before reaching its verdict late Thursday.

For about six months, Holtzclaw preyed on women -- all African-American -- in one of Oklahoma's poorest neighborhoods, exploiting his police badge to intimidate them into keeping quiet.

Prosecutors say the Oklahoma City officer selected his victims based on their criminal histories, figuring their drug or prostitution records would undermine any claims they might make against him.

Then, he would subject them to assaults that escalated from groping to oral sodomy and rape.

On Thursday, his 29th birthday, Holtzclaw rocked back and forth in his chair, sobbing, as the judge read out the verdict.

The jurors recommended a total of 263 years of prison time for Holtzclaw's crimes. Formal sentencing is set for next month.

"We're going to ask the judge to make sure that this defendant never sees the light of day," District Attorney David Prater said. "And we're going to ask him to run consecutive, every count."

Holtzclaw was a former star linebacker on the Eastern Michigan University football team with a degree in criminal justice.

His ruthless scheme started to unravel after one woman told authorities he had assaulted her during a traffic stop in June 2014.

In the months that followed, investigators pieced together the horrifying scale of his pattern of abuse.

He was fired from the force in January after an internal investigation.

"Your offenses committed against women in our community constitute the greatest abuse of police authority I have witnessed in my 37 years as a member of this agency," Oklahoma City Police Chief Bill Citty wrote in the termination letter, according to CNN affiliate KFOR.

Holtzclaw's trial began in early November and was criticized by activists after an all-white jury was chosen to decide on crimes committed against black women. Protesters repeatedly gathered outside.

Holtzclaw, whose father is white and mother is Japanese, is identified as "Asian or Pacific Islander" by court records.

Thirteen women accusing him of sexual assault testified in the trial.

"I didn't think anyone would believe me. I'm a black female," one accuser said in court, according toThe Oklahoman newspaper. Another said Holtzclaw told her would get rid of a drug charge against her if she cooperated with him.

The assaults took place in range of places, including in his police car. One young woman, only 17 at the time, was raped on her mother's front porch.

"He didn't choose CEOs or soccer moms; he chose women he could count on not telling what he was doing," the prosecution said in its closing statement this week.

The defense questioned the credibility of Holtzclaw's accusers, arguing some of them were high when the purported assaults took place. It also challenged the validity of DNA evidence.

Prater, the district attorney, said that the jurors' decision not to convict the former police officer on half of the counts against him didn't necessarily mean they didn't believe some of the women.

"It may mean that we didn't meet our burden (of proof) in those counts," he said.

Holtzclaw, whose father is a police lieutenant on another force, waived his right to testify.

The Oklahoma City Police Department welcomed the verdict against its former employee.

"We are satisfied with the jury's decision and firmly believe justice was served," it said.

But others, including one of the victims' mothers, said they were waiting for the formal sentencing before deciding whether justice had been done.

CNN's Michael Martinez and Gigi Mann contributed to this report.