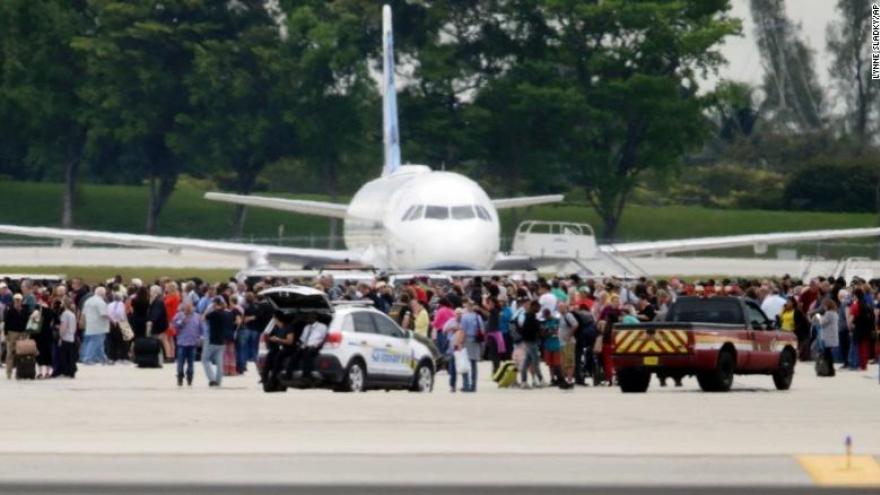 FORT LAUDERDALE, Fla. - (CBS NEWS) Dan and Janice Kovacs and their two children were passing through airport security when the gunfire erupted. They were shoeless - with wallets, passports and carry-on items chugging along a conveyer belt - when they sprang into the mass of people running to safety.

Now they’re among stranded travelers at Fort Lauderdale trying to recover what the airport director says are 25,000 pieces of luggage, cellphones and other belongings separated from their owners during Friday’s airport shooting rampage.

“We have no IDs, we have no passports, no money,” Janice, 39, said Saturday afternoon, wearing sandals borrowed from a brother-in-law. “We just had to leave our stuff and run.”

“All our stuff is being processed. We might not even get that until Monday. I have an 11-year-old who is freaking out. This has been traumatic for her,” she said.

The shooting Friday afternoon, which killed five people and wounded six, also stranded about 12,000 outgoing and incoming travelers, many returning from cruises or arriving ahead of the usual Saturday departures of the massive ships based in the tourism hub’s Port Everglades terminal.

CBS Miami reports that the airport is finally back in business as tens of thousands of passengers who were stuck are trying to finally make their way back to their destination.

Terminal’s one, three and four were reopened Saturday morning but operational portions of terminal two, where the attack happened, remain closed.

After 300 cancellations Friday, flights are getting back to normal at the airport but cleanup from the carnage in terminal two’s baggage claim continues.

Some travelers were kept on planes for more than seven hours while police put the airport on lockdown; others scrambled to protected corners or were hustled out onto the tarmac. The Kovacs, on the way back from a Caribbean cruise, went out onto that rough surface barefoot.

The Florida Highway Patrol sent computer-equipped buses to the airport Saturday afternoon to issue temporary ID cards to help travelers get out of state and even abroad. “We are doing what we can to help,” Sgt. Mark Wysocki said.

Sydney Rivera, a 21-year-old Purdue University student, received a temporary Florida identification card that is nearly identical to the state’s driver’s license. On Friday, she had been about to board a flight home to Indianapolis in another terminal when people scattered over false fears of a second shooter.

“This will make it a lot easier to get through security,” Rivera said as she rushed to finally catch a flight.

Airport spokesman Greg Meyer said most bags won’t be available until Monday. The airport hired an outside firm to collect discarded bags and sort them by where they were found so they can be identified by their owners. Those with lost luggage were told to call a toll-free number.

Richard Lanbry, his wife and 15-year-old daughter were about to board a plane home for Montreal when the shooting began. Amid the commotion, he was separated from the other two and frantically searched for them for about an hour.

“I was pushed down, my wife was pushed down too. It was violent ... people screaming, people crying, old and young. It was very scary,” said the 61-year-old, who was vacationing in Pompano Beach.

On top of that, they now have no luggage, no keys to their home and no coats or sweaters to wear once they arrive in chilly Montreal, only the T-shirts they we wearing the day before.

Larry and Joy Edwards were about to board their flight home to Columbus, Ohio, after a Caribbean cruise. They ran out the skyway and down stairs onto the tarmac, where they were told to drop their carry-on bags and dash out to the runway. They eventually were taken to a hangar and bused to Port Everglades. That’s where they spent most of the night.

“The Red Cross came. They gave us food and blankets and pillows. Everybody did what they could,” Joy Edwards said.

At 4:30 a.m., they were bused to a Miami motel.  They had come back to the airport in an unsuccessful attempt to retrieve their luggage, which contained their passports, medicine and other essentials.

Larry Edwards, a retired electric lineman, said they won’t be able to get home until Monday and pointed to the clothes they had put on Friday morning.

“All we have is this and our smelly selves,” he said.