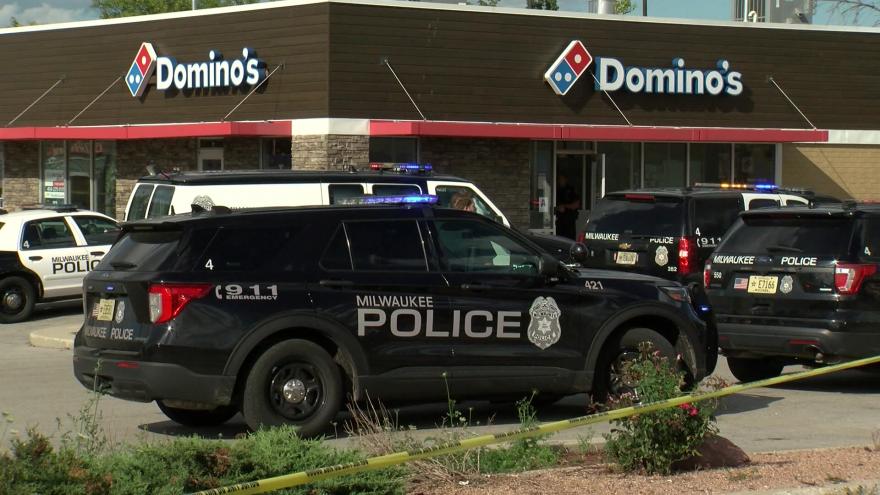 MILWAUKEE (CBS 58) --  A 22-year-old man has been formally charged for allegedly shooting and killing a man at Domino's Pizza last month in Milwaukee.

The suspect, Joel Lemar Blake of Milwaukee, was charged with 1st-Degree Intentional Homicide, Possessing a Firearm-Convicted of a Felony and Bail Jumping-Felony.

If found guilty, he could spend life behind bars.

On Wednesday, Oct. 14, a criminal complaint on the incident provided details on the Sept. 9 shooting.

The complaint reveals that on Sept. 9, Milwaukee police were sent to a Domino’s Pizza at 5430 N. Lover’s Lane.

Responding authorities say the shooting victim, Dominic Carter, passed away on the floor of Domino's Pizza from multiple gunshot wounds.

Blake is not in police custody and a warrant has been issued for his arrest.

Surveillance video described in the complaint shows the victim walk in and wait to be serviced. Just minutes after the victim entered the Domino's, the suspect approached the entrance door. Milwaukee police say the suspect opened the door and fired shots at the victim.

The complaint goes on to detail that following the initial shots, the victim fell to the ground, and the suspect continued to shoot him before fleeing the restaurant.

According to the complaint, the Milwaukee County medical examiner determined that Carter suffered several gunshot injuries across his body in the head, back and arm.

A witness listed in the complaint reported seeing a late model black Acura 4-door vehicle circling a nearby parking lot of the Domino's before an individual exited the vehicle and walked into the Domino's.

That same witness reportedly said they heard five shots before the individual ran away to their vehicle and drove off.

On the night of Sept. 9, Milwaukee police found a burnt black Acura 4-door with a matching license plate to the vehicle the suspect allegedly used the day of the shooting.

Additionally, the complaint states that a Federal Special Agent helping in the case revealed that a confidential informant identified the suspect from a photo as Joel Lemar Blake.

Blake is still on the run and wanted by local authorities.