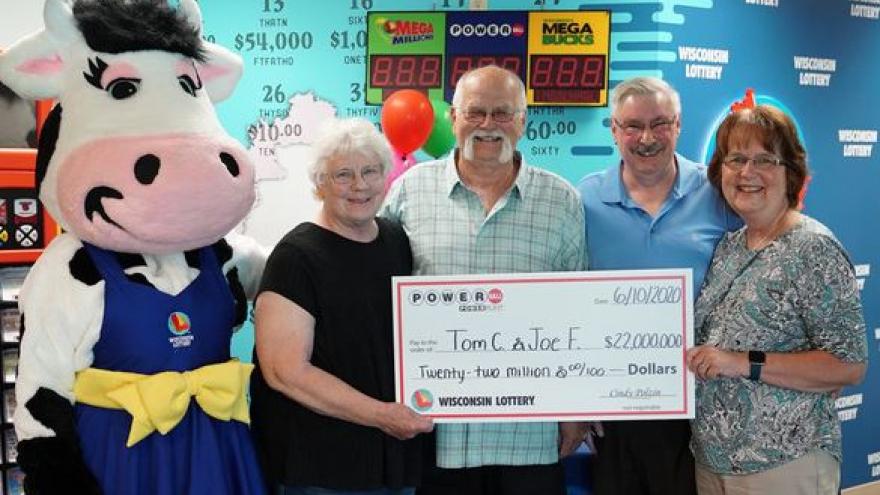 MENOMONIE, Wis. (CBS 58) -- Back in 1992, friends Thomas Cook and Joseph Feeney shook hands and swore if either one won a Powerball jackpot, they'd split the winnings no matter who bought the ticket.

Nearly two decades later, the two are celebrating with a $22 million win.

According to a news release from the Wisconsin Lottery, friends Tom, of Elk Mound, and Joe, of Menomonie, made good on that handshake when Tom realized a Powerball ticket he bought at Synergy Coop Exit 45 on 2100 County Rd. B in Menomonie for the June 10 drawing was the $22 Million jackpot winner.

After learning of the win, Tom called Joe to tell him the news and Joe, an avid fisherman, couldn't quite believe it. "He called me and I said, 'are you jerking my bobber?'" said Joe. Tom gave his two weeks-notice and retired upon learning of his win. Joe is previously retired from an area fire department.

Neither have any extravagant plans for the winnings but are looking forward to enjoying more family time. "We can pursue what we feel comfortable with. I can't think of a better way to retire," said Tom. They do look forward to some traveling. Previously, Tom, Joe, and their wives took a road trip together in a small PT Cruiser convertible. For future road trips, they plan to upgrade their vehicle.

The Wisconsin Lottery reported, choosing the cash option of approximately $16.7 Million, Tom and Joe each took home about $5.7 Million after federal and state taxes. This win is Wisconsin's 18th Powerball jackpot since Wisconsin debuted the game in 1992. This is the first Wisconsin Powerball jackpot won since March 2019 when Wisconsin had a record-setting $768.4 Million jackpot winner. Wisconsin is now tied for fourth on the all-time list of most frequently winning states.