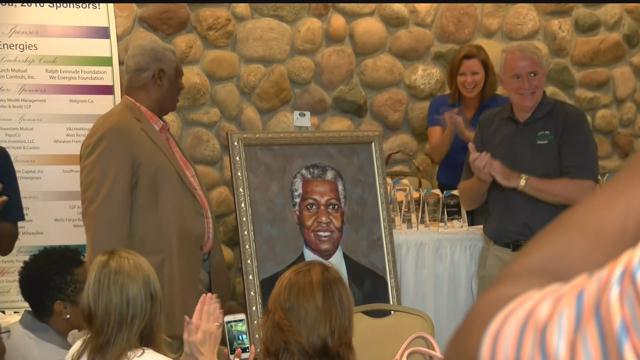 Heavy rain might have cut their game down in half at the annual Fellowship Open, but the annual golf outing managed to raise $125,000 dollars for several Milwaukee based groups with a proven track record of helping children further their education and succeed in life.

This year's recipients are Pathways Milwaukee, Heart of Milwaukee District-Boys Scouts of America, the Boys and Girls Club of Milwaukee and Wisconsin Basketball Academy.

In the past 16 years, the event founded by John Daniels of Law firm Quarles & Brady has raised more than $1.2 million for more than 80 organizations that provide the resources and mentors that children, in particular in the inner city, might not have.

Special Guest Dr. John Franklin was on hand to promote the African American Museum of History and Culture which opens September 24th.

"Taxpayer dollars paid for half of it so it's free for everyone to come," Dr. Franklin told CBS 58's Michele McCormack who served as emcee for the awards presentation following golf. "It's a museum of history and culture. How America has been deeply influenced through music, food, oration, crafts, the way we tells stories. It's a museum everyone can appreciate and learn from."

Legends Award Winner Oscar Robertson spoke about rising up out of poverty through sport.

He was introduced by former Legends Award Recipient and former roommate Wayne Embry who called Robertson the greatest basketball player of all time.

Robertson was on the Bucks the only time they won the NBA Championship back in 1971.

He pointed out original Bucks player Sam Williams in the crowd and congratulated him for his tireless work on behalf of the Boys and Girls Club.

"The Big O" donated his honorarium to the club.

His advice to young people: "I think they should try to get in and graduate college. And take difficult subjects. Don't take something that you can read in an ordinary newspaper. Try to get the institute of technology or some of those mechanical schools. Take something that's sophisticated."