2014 Fairest of the Fair announced 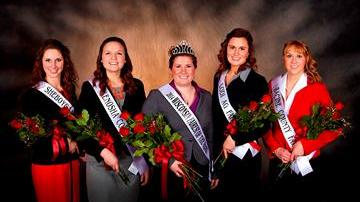 WEST ALLIS, WI – January 9, 2014 – The 2014 Wisconsin Fairest of the Fairs was selected on Wednesday evening during the 91st Annual Wisconsin Association of Fairs Convention in Wisconsin Dells. A field of 40 contestants from county and district fairs throughout Wisconsin participated in the competition, and Kaitlyn Riley, 21, representing the Crawford County Fair, took home the coveted Fairest of the Fairs crown. (pictured above courtesy of Hamburg Photography)

The Wisconsin Fairest of the Fairs program was created to promote the variety of educational, agricultural, social, cultural and commercial opportunities available at Wisconsin's fairs. It is a position of responsibility to the citizens of Wisconsin and the winner must possess excellent speaking, writing and listening skills as well as organization, time management and a passion for Wisconsin’s fair industry.

Riley will serve as a spokesperson for the Wisconsin Association of Fairs, representing all 76 Wisconsin county and district fairs in 2014. Her one-year term begins immediately and responsibilities include traveling to fairs throughout the state making appearances, working with media and promoting the educational, social and economic importance of Wisconsin’s Fair and Agriculture Industries.

In addition, she will serve as an ambassador of the 2014 Wisconsin State Fair, presented by U.S. Cellular, which will take place July 31 through August 10. This includes greeting fair goers and special guests, performing as master of ceremonies for several events before and during the Fair, participating in various contests and representing the Fair during select media appearances.

Riley was selected from a field of talented young women, and replaces the 2013 Wisconsin Fairest of the Fairs, Steffani Koch of Dodge County. The Fairest of the Fairs is chosen by a panel of three judges representing the fair, communications and agriculture industries. This year’s judges were Terri Wilfert, Bill Bruins and Christianne Williams.

The daughter of Jody and Paulette Riley of Gays Mills, WI, Riley is a senior at the University of Wisconsin-Madison studying strategic communications and broadcast journalism. She is currently the public relations student officer for the Association of Women in Agriculture and has served on numerous communications and agriculture committees. For several years Riley has volunteered at nursing homes, children’s hospitals and the Ronald McDonald House while also receiving Dean’s List Honors each year at UW-Madison.