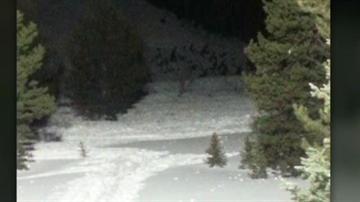 Experts from Colorado's avalanche center and the state's rapid avalanche deployment team will assess the safety of rescue operations at first light Sunday and will develop a plan to search for the missing skiers, the Lake County Office of Emergency Management said.

Three other skiers were hospitalized after the avalanche. Their injuries included a broken leg, a broken ankle, a possible broken rib and a collapsed lung, county authorities said. Two skiers walked to safety unharmed.

Officials have not released the names of the skiers.

Saturday's avalanche follows a string of deadly snowslides that killed six people last week -- two each in Colorado, Utah and Oregon. The Colorado Avalanche Information Center has issued warnings that cover much of the state's ski country throughout the weekend. The center warns of \"unusual conditions\" in the Rocky Mountains -- weak layers beneath the surface of the snowpack, rapid warming and strong winds -- that can lead to \"unusual and surprising avalanches.\"

\"We are seeing very dangerous avalanche conditions developing from basically the New Mexico border north to Wyoming,\" the center said in an advisory issued Saturday. \"And the problem list is about as complicated as it can get. We are seeing very large avalanches taking out very old trees, mine buildings that have been around for many decades, and avalanches burying roadways with 20 feet of debris.

\"People have been getting caught and killed in avalanches recently. These are glaring, flashing and obvious clues that things are not all good across our backcountry. We are seeing a snowpack that is teetering on the brink of critical mass.\"