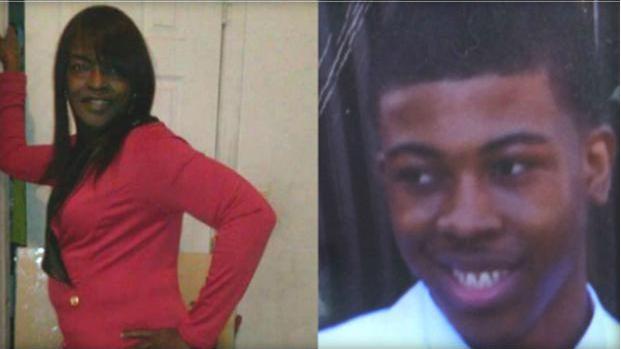 (CNN)Chicago police -- under intense scrutiny in recent months over officer-involved shootings -- were involved in another on Saturday morning, an incident that left two people dead, police said.

In a later press release, police explained that officers had gone to the location for "a domestic disturbance."

"Upon arrival, officers were confronted by a combative subject resulting in the discharging of the officer's weapon, fatally wounding two individuals," the police said.

The department did not identify those killed, including what (if anything) they had to do with the reported disturbance.

But a Chicago fire dispatcher reported that a 19-year-old man and 56-year-old woman were transported from the area after the shooting.

Janet Cooksey, the mother of the 19-year-old, told CNN affiliate WLS that her son died.

"I went to the hospital; my son has seven bullet wounds in him," Cooksey said. "And that's too much."

Cooksey added that her son had been in college studying engineering.The shooting came two days after protests against Chicago police officers' actions -- including the killing of black teenager Laquan McDonald -- shut down parts of the so-called Magnificent Mile, a well-known high-end shopping district in the city.

"Sixteen shots and a cover-up!" the Christmas Eve protesters chanted.They were referring to the fact it took 13 months before authorities released surveillance video of the 17-year-old's shooting. Jason Van Dyke, the white Chicago police officer who killed the teenager, was charged with first-degree murder. Van Dyke -- who has a history of complaints against him, mostly for excessive force -- has pleaded not guilty.

That case contributed to Garry McCarthy losing his job as Chicago's police superintendent and spurred calls for Mayor Rahm Emanuel to resign. The graphic nature of the video, in which Van Dyke is shown shooting McDonald not long after arriving on the scene, didn't help, nor did the fact that this footage didn't square with other officers' accounts on the scene.

Homicides overall, not just officer-involved shootings, have been a major issue in Chicago, dealing with more homicides the past few years than even New York and Los Angeles, two more populous cities.

Emanuel acknowledged the public discontent in a speech earlier this month, saying his city needs "a painful and honest reckoning into what went wrong" in the McDonald case and beyond.

The mayor has already welcomed a U.S. Justice Department investigation into whether Chicago police have made a habit of violating the law.

"We will be a better city for it," Emanuel said. "It is in our self-interest, because we need [federal] assistance to make the fundamental and necessary changes."