2 Injured in shooting and crash near 27th and Coldspring 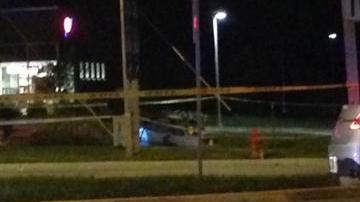 GREENFIELD -- Multiple agencies are investigating a shooting that led to a crash on south 27th Street near the I-43/I-894 interchange on September 3.

Greenfield Police Chief Bradley Wentlandt led a press conference on the early morning shooting, and said police do not believe the shooting was a random act.

When police arrived on scene, they found a vehicle in a ditch on S. 27th street with bullet holes and two injured men inside around 1 a.m.

One of the men had gunshot wounds and suffered injuries in the crash. He was taken to Froedtert Hospital. A second male victim was taken to St. Luke's Hospital with crash injuries, Wentlandt said.

No suspects are in custody, but police are following leads. Milwaukee police and the Wisconsin State Patrol are assisting in the investigation.

The southbound lanes of S. 27th street were closed between Coldspring and Layton but opened shortly after 6:00 a.m.

Police said they will be releasing more information Wednesday afternoon.