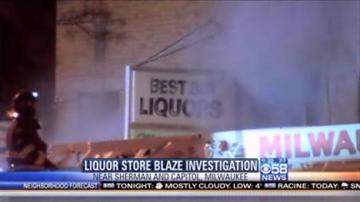 MILWAUKEE -- Two firefighters are recovering from injuries suffered while battling after an overnight fire in Milwaukee.

The blaze broke out just after 3 a.m. Thursday at Best Buy Liquors near Sherman and Capitol.

Officials say the fire started in an apartment on the second floor.

Heavy smoke could be seen coming from the building when firefighters arrived.

Firefighters rescued one person who was seen standing in a window on the second floor.

A few other occupants made it out on their own, officials said.

One firefighter suffered burns to the back and another suffered a leg or groin injury.

Bars on the building made it more difficult for firefighters to get in and put out the blaze.

There's no word on a cause or damage estimates.