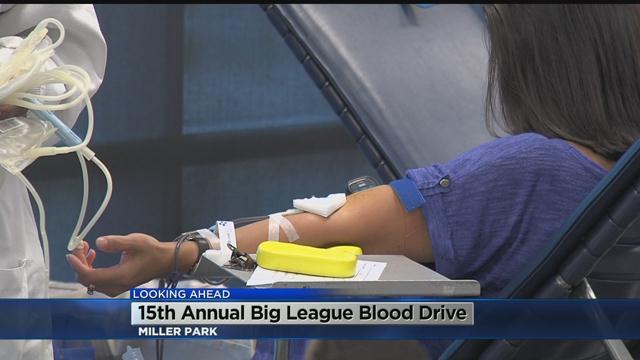 The Blood Center of Wisconsin is asking people to step up to the plate and save lives.

All donors will receive vouchers for two free Brewers tickets to one of two games: the game on Tuesday, August 30th against the St. Louis Cardinals, or the game on Wednesday, September 21st against the Pittsburgh Pirates.

The drive is Wednesday and Thursday from 7 AM to 7 PM on the Club Level at Miller Park.

Donors should enter at the TGI Friday's Hot Corner.

Keep in mind, you will need to bring a photo ID.

Joel Chmielewski,3, and his family were there to thank donors in person.

Joel has received two years of blood and platelet transfusions in his battle against Leukemia.

He's looking at another year of chemo, but at the blood drive, was running around and showing plenty of strength to beat his older brother in a game of tag.

"We hadn't really donated in the past," said Kay Chmielewski, Joel's Mom. "There was always an excuse you could come up with. Somebody else is doing it or I just don't have time. It really makes you take a look and prioritize that this is the thing to do because of the need that's out there."