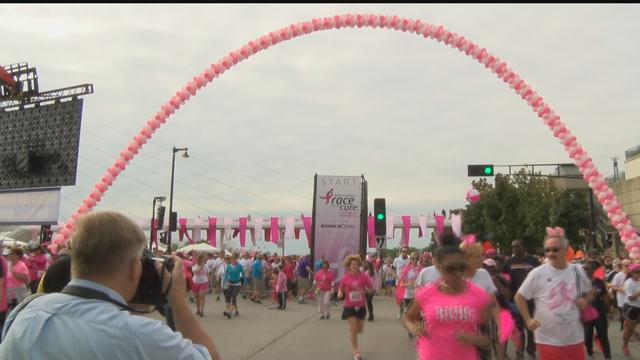 Starting at 7 a.m. authorities blocked roads around the lakefront where breast cancer survivors and their supporters congregated.

Strutting down the street in furry pink leg warmers a group calling themselves "Wanda's Warriors" walked without the full group they once had.

"It affects us very much. It's a very hard feeling. I mean, just standing here today hurts our hearts," Christine Schmidt said.

The story's similar to hundreds of others at the Race for the Cure which raises money for local survivor support. In addition, 25% of the fundraising goes to national research. That's according to the race chair Melissa Flynn.

"You know, unfortunately I don't think there's a lot of people who haven't been affected by breast cancer. One in eight women will get breast cancer in their lifetimes," Flynn said.

It's one reason, perhaps, the race is growing - even after some walkers have died.

"You're celebrating the memory of them and you're also going something so that it doesn't happen to someone else in the future," Flynn said.

"We have some crazy costumes out here. I mean, who doesn't want to wear a pink tutu and a mohawk?" Flynn said.

"We've done this for about ten years now and we love to stand out," Schmidt said while walking with 'Wanda's Warriors'.

"This is what we do," Schmidt said.