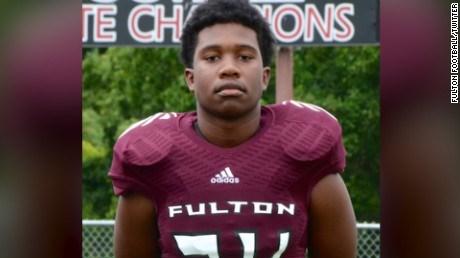 (CNN) There's a saying that the true character of a person shines in a time of crisis.

There's no doubt of Zaevion William Dobson's character, according to the 15-year-old's friends and family, who are mourning his death.

Thursday evening, the football player jumped on top of three girls to shield them from a spray of bullets in Knoxville, Tennessee, according to police and CNN affiliate WATE.

Police said Friday that the three male suspects believed to be responsible for the shooting had gang ties, and had fired upon on a group of school kids celebrating the holidays.

Zaevion was not only a football player, but a mentor to his peers, Mayor Madeline Rogero told CNN affiliate WATE. The teen's coach, Rob Black, said that the sophomore was liked by teachers and students at Fulton High School.

"This is a fine, fine young man who is a success story," he said. "And I want to try to continue to celebrate the life that he had here and the impact that he made on his peers," Black said.

A candlelight vigil was held Friday evening. Dozens came out to celebrate the teenager's life, some placing candles in the shape of the number 24, his jersey number.

Dobson's brother Zach shared the last moments he had with his brother after the shooting. "I found him on the porch and I picked him up and he was laying in my hands dead," he told WATE.

Friend Jaylin Posey said Dobson's actions were heroic. "It was good to know he was willing to protect others, but then it was sad he had to give up his own life for it," he said.

The girls were not injured, according to Knoxville police. One of the suspects died from a gunshot wound late that evening, although not all the details are clear. Two others were arrested; the investigation is still ongoing.

There were three overnight shootings in Knoxville the evening of Dobson's death. They may have been connected, according to police.

Two girls spoke to CNN affiliate WVLT about the shooting. "If it wasn't for Zaevion, if he would have just ran off the porch, we would have probably been shot," Kiara Rucker said.

Faith Gordon said by the time the shooting was over she told the teen he could get up, but he didn't. "So I just went upstairs, and by the time I came back to make sure everything was real, (I saw) he was shot in the head," Gordon said.

Dobson's brother said it was the teenager's dream to be a football player or a coach.

A GoFundMe page has been set up to help the family lay the teenager to rest.