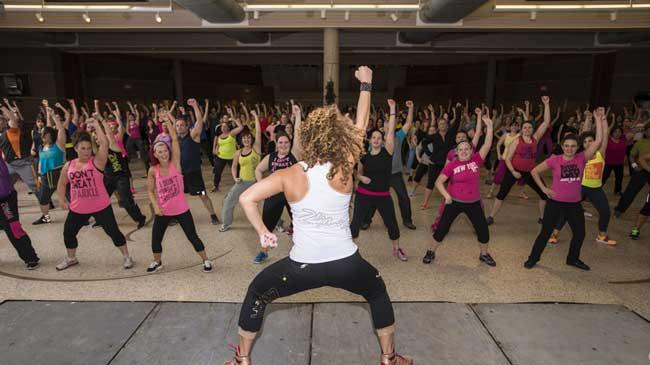 PORTLAND, OR (KPTV) -A car prowler probably got the shock of a lifetime when 15 spandex-clad women ran out of an exercise class to stop her from stealing out of one of their vehicles.

This happened last week when the women were in a 5:30 a.m. workout class.

Jennie Hogan Horton was taking the class for the very first time at the Northwest Women's Fitness Gym in NE Portland.

Half way into the class, another woman noticed someone breaking into Jennie's red Subaru parked right outside the classroom. They all ran out the emergency exit door and Jennie said the thief was hanging out of her side window, rummaging through the back seat.

Jennie said the thief was stunned when all the sweaty women in workout gear started coming after her, so the woman jumped into a white RAV4 with a man behind the wheel and took off.

The thief broke the car window with a cinder block and stole a bag of dirty clothes, but Jennie said she was so grateful that all of her classmates backed her up.

"Oh yes, we scared her. We definitely scared her and I wouldn't be surprised if she was under the influence of something. I was more proud of those women. I still don't know their names. It's like I need to go back and work out just to thank them."

Jennie said she was already having a stroke of bad luck with her car before this happened. Someone hit it a couple weeks ago while it was parked on the street, leaving a huge dent in the side.