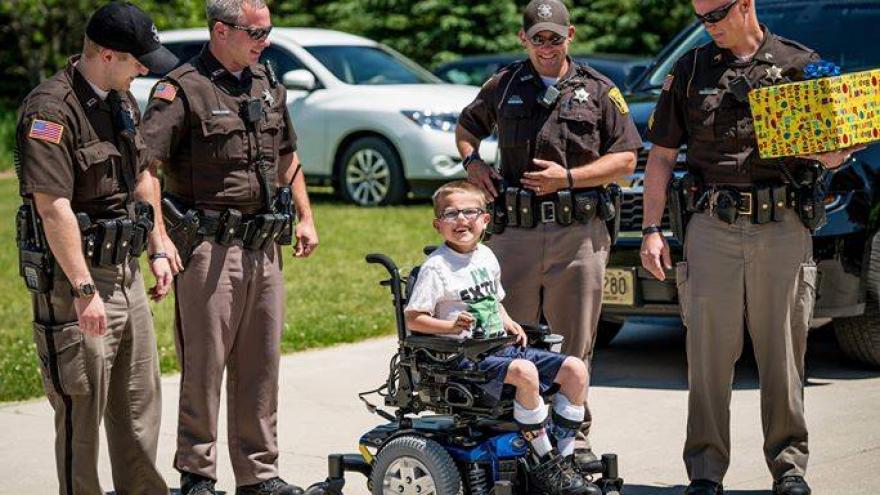 It was a special day for a special 14-year-old, thanks in part to the Washington County Sheriff's Office!

The Sheriff's Office received a request from a family friend of Eli Morgan asking them to stop by the boy's Birthday Party on Saturday, June 10th.

This wasn't just any Birthday party. It was celebrating Eli's Golden Birthday. Eli was turning 14 on June 14th and the family was hoping that a deputy could stop by the party because Eli dreams of being a Deputy.

Eli was born with a hypoplastic left heart, where the left side of his heart was severely underdeveloped and he had to have a heart transplant at only 5 weeks old. A transplanted heart ages faster and therefore does not last as long. Early this year, doctors found that his heart is functioning less and less efficiently. Everyday things like eating and walking have become more and more difficult. Eli now receives oxygen and gets around in a wheelchair to conserve energy.

Therefore, The Washington County Sheriff's Office felt that just having a Deputy stop by Eli's party wasn't enough for his special celebration!

The Sheriff's Office had a special Junior Deputy badge made as well as a uniform custom made to fit Eli. The Sheriff also drafted an Honorary Oath of Office appointing Eli a fully sworn Junior Deputy.

Sgt. Chad Beres along with Deputies Justin Jilling, Jeremy Miller, and Dustin Thompson responded to the Morgan residence in their squad cars to deliver Eli his presents at his birthday party.

The Washington County Sheriff's Office would like to thank the Morgan family for letting them share in the special celebration.