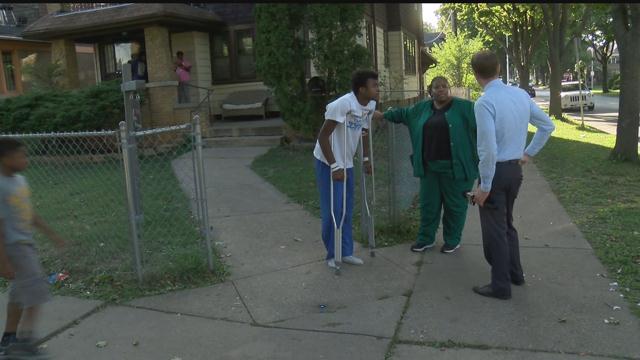 MILWAUKEE, Wis. (Sept. 23, 2015) -- A 14-year-old boy is recovering after he was shot in the leg Wednesday. It happened around noon on 45th Street between Hadley and Center. Only CBS 58 News was there as Arrion Jackson came back to his aunt's house from the hospital.

"Came through the top right there and came out the back," said Shatika Williams, as she describes her son's injuries.

Arrion Jackson was walking with his brother, Andrew. The two say they were minding their own business when thing got real.

"We was like three houses from the corner then we just heard shots," Arrion described.

Andrew says the two started running, "I just heard him 'ah, ah ah ah', and then we ran to the house and when we got here, we seen it or whatever."

The two brothers have no idea who would do that.

"They ain't say nothing to us or none of that, didn't talk, nothing," Andrew said.

They say whoever it was was inside a black car that sped away right after.

"Really to just be riding around shooting people for no reason is ridiculous," Williams said.

Williams wants to know who the gunman is.

"I mean, if you know, come forward so we can get 'em off the street so that they don't hurt anybody else," she added.

If you have any information, call the Milwaukee Police Department.