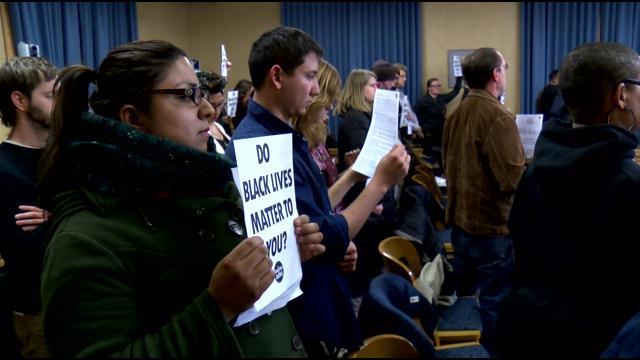 After several months of voicing their concerns to public officials and chanting as they marched through the streets of Downtown Milwaukee, the Coalition for Justice, led by the family of Dontre Hamilton, fought for justice with silence.

Several demonstrators filled the room during Thursday evening's meeting with Milwaukee's Fire and Police Commission.  During the public comment, seven speakers from the Coalition for Justice approached the podium to dedicate their two minutes to Dontre Hamilton.

Members of the coalition stood together in solidarity holding signs that said \"Do Black Lives Matter to You?\"  Their objective: to give members of the commission a moment to contemplate the question they posed.

The meeting comes two days after what would have been Dontre's 32nd Birthday, his family says it's been a difficult week for them as they remember Dontre's life.

Dontre's brother, Nate Hamilton, a co-founder of the Coalition for Justice took his two minutes to speak for Dontre, who could not be there to speak for himself.

As he addressed the commission, Nate posed questions he wanted to ask Manney, like why did he shoot Dontre, and did he feel like he had the appropriate training to handle the situation at Red Arrow Park .

\"I'm just honored to be his brother and to see what his name is doing for the community is beautiful,\" said Nate.

Many demonstrators with the Coalition for Justice were critical of a University of Wisconsin, Milwaukee (UWM) survey presented at the meeting measuring citizen satisfaction with Milwaukee Police Department.

The survey showed more than 70% of Milwaukee citizens were satisfied with police in the city.

\"That survey represented less than .0002 of the population,\" said Curtis Sails, with the Coalition for Justice.

\"It's my hope now that we got a baseline this year, that going forward we can measure changes in attitude and opinion,\" said Chief Ed Flynn, with Milwaukee Police Department.

As a hearing approaches for Manney, the Coalition for Justice demands the Fire and Police Commission to announce a date for the hearing.

The Fire and Police Commission says a hearing for Manney is slated for early February.