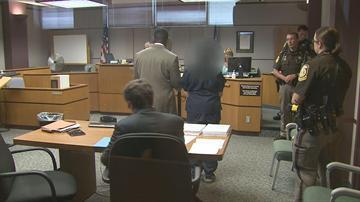 \"The Waukesha Police Department is deeply saddened that this 12-year-old girl had to suffer through this horrific crime,\" Police Chief Russell Jack said at a press conference Monday.

Saturday morning, a bicyclist came across a severely wounded 12-year-old girl near Big Bend Road and Rivera Drive in  Waukesha.  She had been stabbed 19 times in a wooded area near there, with some wounds missing arteries by just one millimeter.

\"Many of the stab wounds struck major organs, but incredibly and thankfully, the victim survived this brutal assault,\" Jack said.

Saturday afternoon, a Waukesha County Sheriff's Deputy found the two young suspects walking near I-94. Police say the girls spent several months plotting to kill their victim and lured her into the woods.

\"Both suspects had a fascination with a fictitious character that often posted to a website that is a collection of  small stories about death and horror,\" Jack said.

The criminal complaint refers to that online character as \"Slenderman.\"  One of the girls told police \"It was the hope that [the victim] would die and they would see slender and know he exists.\"

\"Parents should not be allowing their children to have unrestricted or unmonitored internet usage,\" Jack said.  \"Whether it be on  their computer, on their smart phone, on their Playstation.\"

Both girls face first degree attempted intentional homicide charges.  When police questioned her, one of the suspects said, \"It was weird that i didn't feel any remorse.\"

\"This is a very disturbing investigation,\" Jack said.

If convicted, both girls face up to 60 years in prison. The victim is recovering and listed in \"stable\" condition.

A very tragic occurrence took place on Saturday, May 31, 2014, involving middle school students that attend Waukesha schools. The incident did not take place on any school grounds or during school hours.

As our thoughts and support go out to the victim and her family, we have also provided counselors at all schools where this may have caused distress among students.