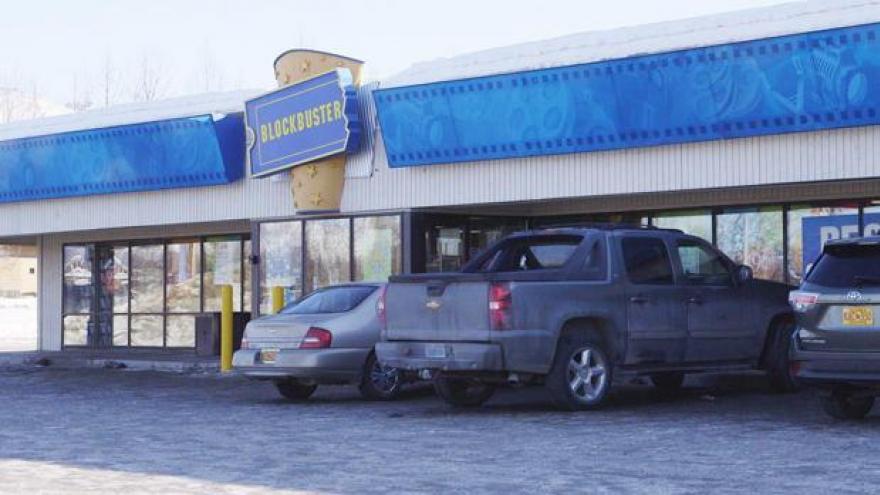 (CBSNews) “I can’t tell you how many business cards I’ve given out to people ‘cause they literally do not believe that I’m from Blockbuster,” said Kevin Daymude. He’s the manager of a Blockbuster Video outlet in Anchorage, Alaska.

The new releases are new, and the candy is fresh, but it feels like a place from another era.

Daymude has been there for 26 years, since the days of people returning VHS tapes and having to rewind them. “’Be kind, rewind’ -- we had stickers on there!” he laughed.

Maybe we should rewind for a minute …

You’ve seen the headlines: Blockbuster went bankrupt in 2010; it closed its last 300 stores in 2013. So how is this even possible?

“For a lot of people, they haven’t seen a Blockbuster store in, maybe, five or six years,” said franchise owner Alan Payne.

Back when Blockbuster shut down, Payne decided to keep HIS doors open. Today, he owns nine of the last 12 Blockbusters left in the entire country. (There were once over 9,000 worldwide.)

“At its peak almost half of the families in the entire country were going in a video store every week,” Payne said.

“I don’t know of any other industries that have gone from nothing, to an integral part of the culture that fast.”

The stores were racking up millions of dollars of profit in late fees alone. In 1999, actress Rene Russo and a guy dressed up like a giant videotape rang the opening bell for Blockbuster’s IPO.

But two years earlier, another video rental company was founded: Netflix. Blockbuster had the opportunity to buy Netflix in 2000 for $50 million. Today, it’s worth $60 BILLION.

Payne explains: “Blockbuster was convinced at the time that they could compete with Netflix, and rather than buy them, they wanted to compete with them.”

But by the time Blockbuster launched its own DVD-by-mail service, it was too little, too late. Netflix and Redbox had already moved customers away from the stores ... and when high-quality streaming video came along, they never had to leave the couch.

There were once close to 60,000 employees wearing the blue and yellow. Now, Kenai Malay is one of just a handful left at a Blockbuster in Wasila, hometown of Sarah Palin. Here, there’s something you don’t normally see on Netflix: restocking shelves.

And here, like in the rest of Alaska, Internet is expensive. When you’re getting charged by the gigabyte, the video store can actually offer a better deal.

And during the cold dark winters, they can be community gathering places.

It’s a chance to get a recommendation from a person instead of from a computer, to stroll instead of scroll.

“The shopping experience of looking for a movie on a screen versus coming in here and seeing literally 10,000 titles, there’s no comparison,” said Payne.

At these last few Blockbusters in the last frontier of Alaska, the employees all know how this movie ends; they’re just trying to pause and enjoy it while it lasts.