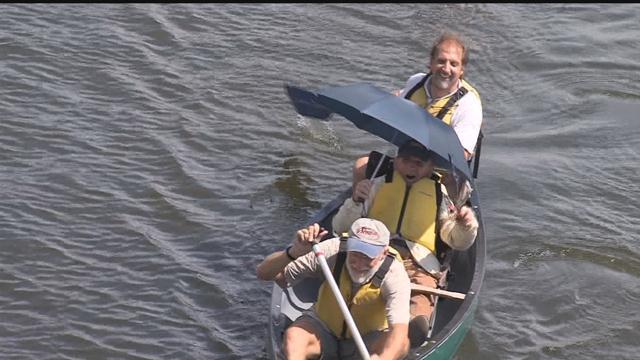 How would you celebrate your 100th birthday?

For Richard Franz the answer was a canoe trip down the Milwaukee River.

It was a present the Urban Ecology Center was more than happy to deliver and the featured subject in \"Our Stories with Michele\" on the CBS 58 News at 4 p.m.

\"I'm going down the river,\" Franz chuckled. \"That can have two meanings. I won't discuss the other. This is a celebration of life.\"

When Ken Leinbach a friend and Executive Director of Milwaukee's  Urban Ecology Center heard about the wish he just had to oblige.

\"Back in the 30's he (Franz) had an office on the Milwaukee River,\" explained Leinbach. \"When I told him we take kids on trips down the river he said 'I want to do that.' I said let me know. I'll make it happen.\"

Leinbach took it a step further, organizing a full on excursion to the harbor with a pizza party and several of Franz's friends along for the ride.

\"We're here to have fun!\" declared Leinbach. \"I'm calling it the canoe trip of the century!\"