1 Person dead, another in serious condition after motorcycle crashes in Kenosha Co. 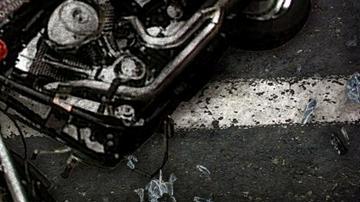 Kenosha County Sheriff’s responded to two separate motorcycle crashes within minutes of each other on Saturday afternoon.

The first crash occurred around 2:20pm in the 32000 block of CTH F in the town of Randall. The driver, 51-year-old Joseph F. Fox, a Bristol resident, lost control of his Harley Davidson motorcycle due to a strong gust of wind. He was ejected from his motorcycle and sustained severe head injuries. He was not wearing a helmet. His motorcycle went into a ditch, but returned to the road striking one of the other motorcycles.  That motorcycle was being operated by Fox’s daughter, 23-year-old Chelsea J. Fox, a Kenosha resident.

A second motorcycle accident happened just a half hour later around 2:50pm, when Kenosha County Sheriffs say they responded to the scene of another very serious motorcycle crash.

A single motorcycle was traveling Eastbound on STH 142, Burlington Road, in the Town of Brighton.  In the 23600 block of STH 142, 53-year-old Jeffrey D. Snell, a Town of Brighton resident, failed to negotiate the curve while operating his Harley Davidson motorcycle.

The motorcycle left the roadway and Snell was ejected.  He sustained serious head injuries and was taken by Flight for Life to an area hospital. He remains in severely critical condition.

He was not wearing a helmet and speed is believed to be a factor in this crash.