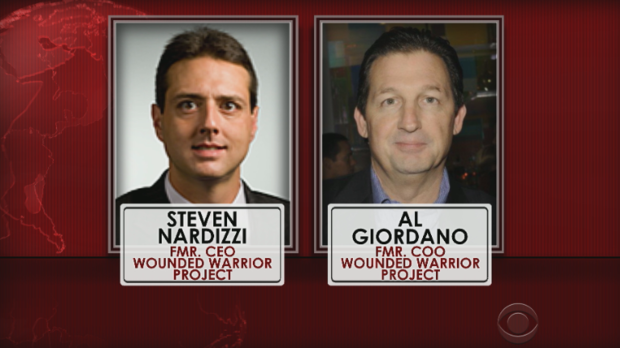 The two top executives of Wounded Warrior Project were fired Thursday by the board of directors.Americans donate hundreds of millions of dollars each year to the charity, expecting their money will help some of the 52,000 wounded in Iraq and Afghanistan.

But CBS News found Wounded Warrior Project spends 40 to 50 percent on overhead, including extravagant parties. Other veterans charities have overhead costs of 10 to 15 percent.

But while the money was pouring in, it was also flowing out on lavish employee conferences -- $26 million in 2014."Let's get a Mexican mariachi band in there, let's get maracas made with the WWP logo put them on every staff member's desk. Lets get it catered, have a big old party," said Eric Millette, a retired army staff sergeant.

He took a job with Wounded Warrior as a motivational speaker, but after two years he quit.

"I'll be damned if you're gonna take hard-working Americans' money and drink it and waste it, instead of helping those brave men and women who gave you the freedom to walk the face of this earth."

More than 40 former employees told CBS News that spending by the charity was out of control. Two former employees were so fearful of retaliation they asked us not to show their faces."It was extremely extravagant. Dinners and alcohol and and, just total excess," one said. "I mean, it's what the military calls fraud waste and abuse."

Former employees also told us the excessive spending began when Nardizzi took over as CEO in 2009. They point to the 2014 annual meeting at a luxury resort in Colorado Springs as typical of his style.

Nardizzi has defended the charity's spending. "If your only fixation is spending the most on programs, that's feeling good, but not necessarily doing good," he said.But many major donors were outraged, including Fred and Dianne Kane. They raised $325,000 with golf tournaments, and are not pleased with allegations that only a little over half of donations went to help wounded vets.

Fred continued, saying he is done with WWP except for his new mission of trying to see change within the organization.

Sources tell CBS News the board has received preliminary results of a financial audit. And there are discussions under way about retired senior military officers who are being considered to take over leadership of the organization.