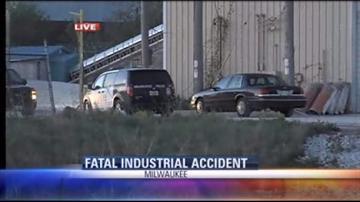 MILWAUKEE -- A 38-year-old man died overnight Thursday after being trapped in a machine at a cement manufacturing plant.

According to preliminary reports from police, an alarm was going off inside of NUVO Construction on Chase Avenue indicating there was something wrong with a machine.

When Stephen Rauth went to investigate, he became pinned inside of the machine.

A supervisor kept trying to reach Rauth using a radio for almost 20 minutes, but was unsuccessful.

When the supervisor went to check, he discovered Rauth's body trapped in the machine.

He was deceased before the Milwaukee Fire Department's Heavy Urban Rescue Team arrived.

Family members shared positive memories of Rauth at the scene.

\"He was a really hard worker, clearly,\" his sister Amanda Lee said through tears. \"He was just an amazing person all the way around. Always laughing and always talking crap. Picking on me, picking on my mom.\"

Nicholas Rivecca, manager of NUVO, told CBS 58 that the plant will be closed Thursday, and the company is calling its cstomers to reschedult deliveries.