Woman shot by outside bullet in home near 12th & Keefe 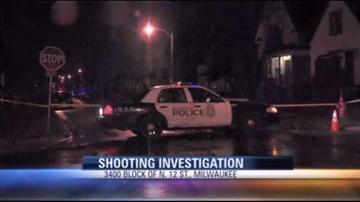 MILWAUKEE -- A Milwaukee woman is recovering from a gunshot wound suffered when bullets pierced the wall of her home while she was lying on a couch.

Now, neighbors worry they could have been a victim.

The evidence of what police said happened around 12:30 a.m. Friday is clear.

Two holes are labeled with numbers to mark where bullets fired outside of the house, went flying through the front of the home.

Authorities said the 24-year-old female victim was lying on a couch when she was hit.

Police said she remains in the hospital for treatment of her injuries.

People at the home didn't want to talk about the incident, but CBS 58 did speak with a neighbor, who said it's terrifying to live on the block, especially with kids.

She said police already patrol the area and there's only one way to keep her family out of the line of fire.

\"What needs to happen is the one's that don't belong over here, need to stay in their area. There's too much drama,\" she stated. \"You shouldn't have to tell your kids to have to hit the floor because you're hearing, you know, gun shots.\"

Neighbors tell CBS 58 this is the latest incident for those who live at the home.

In March, an 8-year-old relative was struck and killed by a car while playing outside.

A memorial for the boy remains on a nearby tree.

Meanwhile, Milwaukee Police are investigating whether the occupants of the home were targeted during the shooting.

There are no suspects in custody.
Share this article: