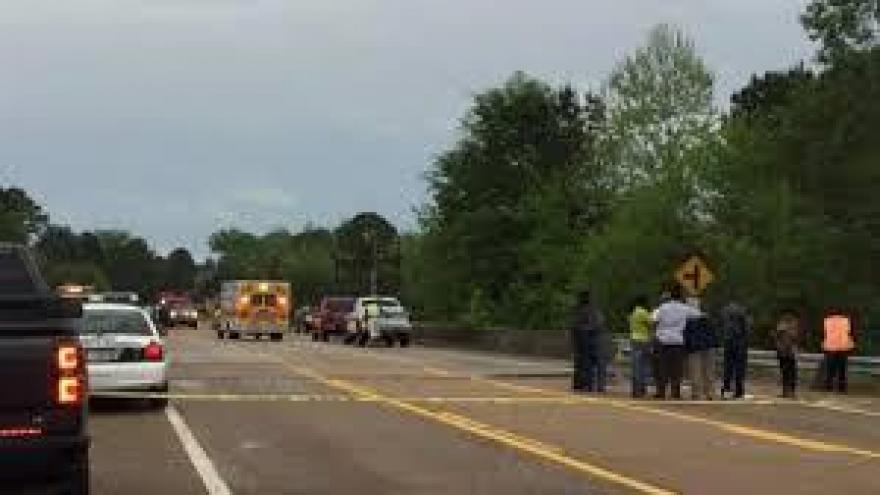 (CBS NEWS) JACKSON, Miss. -- A Mississippi woman who desperately tried to direct rescuers to her sinking vehicle after it skidded into a rain-swollen creek was among four people killed in storms across the South.

Jacqueline Williams, 52, ran off a road into a creek in Florence before dawn Monday and dialed 911 from the car as it went down, said Rankin County Coroner David Ruth. Ruth said Williams, who lived in Florence, was trying to relay her location to a dispatcher as the car settled into the swirling waters.

“She was trying to tell the dispatcher where she was, and she could actually hear the sirens,” Ruth said.

The two lost contact, and Ruth said a swift-water recovery team later found Williams’ body in the creek outside the car.

Thomas said authorities got a call from a woman saying her car was being swept off into the water around 4 a.m. Authorities immediately began looking but couldn’t find her in time.

“It was really quick,” Thomas said.

The woman’s body was eventually recovered, and Thomas said authorities were waiting for the waters to recede so they could recover the vehicle.

Video later showed the car being lifted out of the water:

Exclusive video of the car being lifted out of the water after floodwaters swept it away this morning killing the driver @WJTV pic.twitter.com/Ln6RHfn6L2

In the tiny Mississippi Delta town of Glendora, the mayor’s wife died Sunday when strong winds toppled a tree onto the couple’s house. Mayor Johnny B. Thomas was briefly hospitalized with injuries after his wife, Shirley, was killed, said town clerk Aquarius Simmons.

“She was a nice lady. Very sweet. Everybody loved her,” Simmons said of Shirley Thomas.

Forecasters said tornadoes and strong winds were likely from Mississippi to South Carolina. The greatest tornado risk was centered over southern Alabama, the National Weather Service’s Storm Prediction Center in Oklahoma said. Some schools in Louisiana, Mississippi and Alabama canceled or delayed the start of classes Monday so students wouldn’t travel in heavy rain or on flooded streets.

Forecasters said about 3 inches of rain already had fallen in parts of western Alabama. Alabama Power said more than 27,000 homes and businesses were without electricity.

By Monday morning, the worst of the weather to hit Louisiana had passed through but left pockets of tornado damage and flooding.

Louisiana Gov. John Bel Edwards signed a statewide emergency declaration Monday before embarking on a trip to survey storm damage in two central and southern parishes. Some of the heaviest rains fell in central Louisiana from Sunday into early Monday. C.S. Ross, a National Weather Service hydrologist in Shreveport, said nearly 8 inches of rain was reported in Grant Parish in the north central part of the state.

A tornado flipped a mobile home Sunday in Breaux Bridge, Louisiana, which is about 50 miles west of Baton Rouge, killing a mother and her 3-year-old daughter. The storm also brought hurricane-force winds, large hail and sparked flash flooding. Up to 6 inches of rain fell in some areas.

“It hit the trailer, flipped it and tore its side off,” Higgins said. Francine Gotch, 38, and 3-year-old Nevaeh Alexander were pronounced dead at the scene, according to Higgins.

They were in bed sleeping when the tornado hit, reported CBS News correspondent David Begnaud. An outbreak of tornadoes struck Louisiana and Texas Sunday.

“We called Francine’s name and there was no response,” said Nevaeh’s grandmother, Marcella Alexander. “Can’t explain it. Feeling very sad.”

Nevaeh “was the sweetest little girl,” said Sheryle Rubin, who’s engaged to the girl’s uncle. “She was only 3 years old but was the smartest girl in the world. She would’ve started school in August.”

Congressman Clay Higgins said, “This weekend’s severe weather has tragically taken two beautiful lives in Breaux Bridge. Please join me in prayer for the victims, their families, and all the brave first responders called to action during these storms.”

“Our hearts are torn for this family,” he said, CBS Baton Rouge affiliate WAFB reported.

Other mobile homes on the same plot of land were not affected.