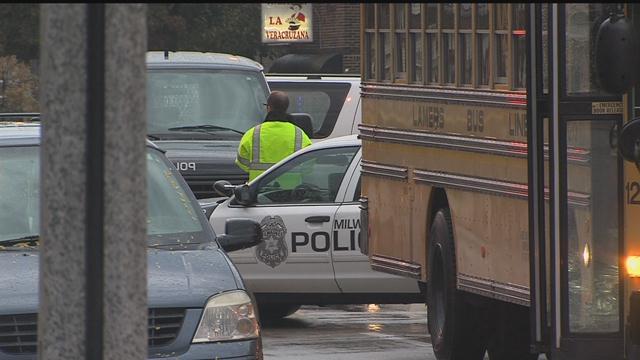 A teenage girl was hit and killed by a school bus in Milwaukee this morning.

CBS 58's Lindsey Branwall spent some time with the victim's family earlier today. They ask for privacy as they try to figure out how exactly she was hit.

An exclusive surveillance video from a nearby business shows one view of what happens.

The bus turns left on a green light from 9th Place to Oklahoma Ave. The teenager being hit is not visible, but caught on camera is the bus stopping right after.

Robert Higgins ran out on Oklahoma Ave. when he heard horns honking.

Another witness, Alex Schmidt was already in the street, calling 911.

"As soon as I seen that my first reaction was to see if she was okay. The bus stopped, reversed a foot or two. He got out, put the four way flashers on. Then I walked up, asked her if she was okay. She didn't respond, she was holding her chest area and I asked if she was she was okay, no response, and I looked at the bus driver and said I have to call 911," says Schmidt.

A statement from Lamers Bus Line tells us more about the driver. "She is very shaken up, and this is a tragedy for everyone involved. our hearts go out to the family."

"It was raining and still kind of dark but clearly that didn't have to happen like that, you know? It's somebody's daughter, somebody's niece, someone's kid," says Robert Higgins.

The general manager, Dean Brown says the 62-year-old driver has been with the company for 25 years and has a spotless record.

The bus driver did stay at the scene and cooperated with police.

Tonight on the CBS 58 News at 10, the victim's family will speak out.