Witness: SUV Carrying Kids Sped up Before Plunging Off Cliff 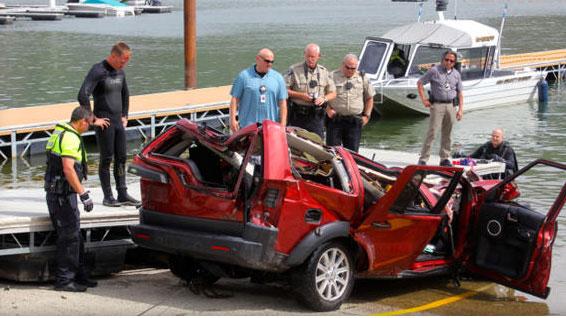 BOISE, Idaho (CBS NEWS) -- A 40-year-old Boise woman and her three children died after an SUV plunged Thursday morning about 70 feet off a cliff and into Lucky Peak Reservoir, authorities said.

Divers recovered the bodies of two girls, ages 12 and 6, and the body of a 10-year-old boy from the vehicle, which was about 40 feet below the surface Thursday morning, according to the Ada County Sheriff's Office. Authorities said they weren't able to recover the woman's body until the vehicle was pulled from the reservoir late Thursday afternoon.

Deputies responded about 7 a.m. after receiving an initial report of a vehicle going off High Bridge on State Highway 21. Deputies said they found the vehicle instead went off a cliff near the north end of the bridge.

A witness saw the SUV accelerate from the side of the road to go over the cliff, the sheriff's office said. Deputies said they found no skid or brake marks where the vehicle went over the edge.

"We do not know if it was a mechanical issue or a medical issue or if this was in fact an intentional act on the mother's part," sheriff's department Capt. Dana Borgquist said, CBS Boise affiliate KBOI-TV reports. "We're investigating that at this time. We're gonna follow up on every lead."

Investigators said they'll study the wreckage to determine if the vehicle had any mechanical problems.

The sheriff's office said an autopsy will be done on the woman's body on Friday. The Ada County Coroner's Office is expected to release the names of those who died in the next few days.