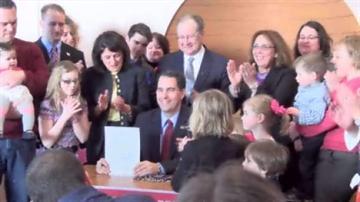 MILWAUKEE-- Governor Scott Walker signed a bill into law on Monday that will help save the lives of children in Wisconsin.

The bill is called \"Saving Little Hearts\" and it's one that will make it mandatory for newborns to get a Pulse Oximetry test in the state of Wisconsin.

\"It's a simple test that only costs 4 dollars, but it can save a life,\" said Governor Walker during a press conference at Children's Hospital of Wisconsin.

The American Heart Association in Wisconsin has been pushing for this bill for the past three years.

\"This is a really great thing for heart moms like me, moms who have kids with congenital heart defects,\" said Lorena Falgeme, whose 4-year-old daughter, Valeria, was born with the defect.

Valeria was discharged from the hospital as a health baby, but 9 days later, that's when the problems began. Valeria was hospitalized and at 15-days-old, doctors performed open heart surgery to try to save her.

\"The test would've helped her because we would've known from the very beginning that she was born with a heart defect. We are lucky to be able to talk about it with her by our side but a lot of families are not as lucky as us,\" said Alfageme.

The procedure measures the oxygen level in the blood. It is considered to be a noninvasive, painless, general indicator of oxygen delivery to the peripheral tissues.

As of today, it is unclear when the law will be implemented. Governor Walker said he hopes it will happen within two to three weeks.