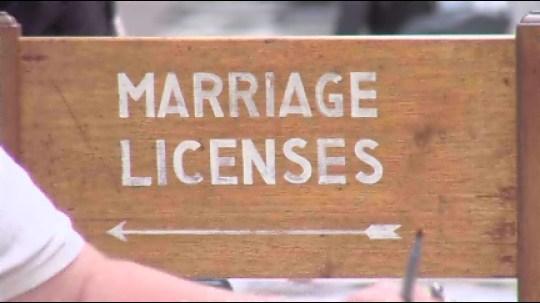 On the heels of the U.S. Supreme Court's decision not take up Wisconsin's appeal on same-sex marriage, some county clerks are ready to issue marriage licenses.

The Milwaukee county clerk expects an initial rush same of sex couples, but nothing like what happened four months ago.

In June, hundreds of same sex coupes flooded the courthouse to say \"I do,\" when Judge Barbara Crabb initially declared the state's ban on same-sex marriage unconstitutional.

Milwaukee County Clerk Joseph Czarnezki said his office issued nearly 300 licenses to couples before they were put on hold.

Matt Schreck and his husband were among them. In fact, they're the first gay couple in Wisconsin to be legally married.

Schreck said the back and forth on the ruling caused confusion and created challenges with employer benefits.

But now, the law is clear and the fight for marriage equality has finally paid off.

\"It's fantastic. \"If you would've told me 10 years ago that I'd be married here in Wisconsin, I would have not believed it, he said. \"It seems like just two years ago we were fighting for domestic partnership benefits.

It's now up to the state to fix the application and other forms so they reflect gay couples. Right now, they have spaces that read bride and groom.