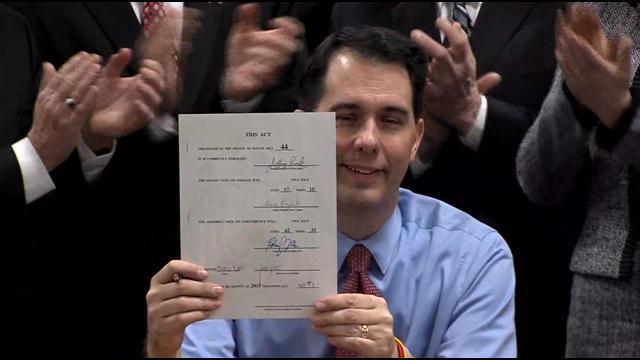 The 110-year-old company is the largest maker of water meters in the North America and the location in Brown Deer was the only one where union workers didn't have the freedom to choose to join.

Now that they do, Badger Meter's CEO said the company can add jobs, something it hasn't done at its Brown Deer facility for 10 years.

In front of a crowd of supporters, Governor Walker said that's the power of right to work. It sends a message worldwide that Wisconsin is open for business and will be a big tool to boost the state's economy.

So, pen by pen, he signed his name to the controversial bill, making it official.

The governor's support for right-to-work is a turnaround from statements he made in December when he called such a bill \"a distraction.\" But when Republican legislators felt they had a chance to get a bill passed, they jumped at the opportunity. The fast-tracked bill took only a couple of weeks to pass through the Republican-controlled State Assembly and Senate.

Walker credited the hard work of fellow GOP leaders, who took charge on making right-to-work a reality, just as he did with Act 10.

In a statement, president of the Wisconsin AFL-CIO Phil Neuenfeldt said, “By signing Right to Work into law, Gov. Walker continues his crusade on the hard-working, middle-class families of Wisconsin.”

Right-to-work won't have any immediate impact on union members at Badger Meter because their current contract doesn't expire until 2016.