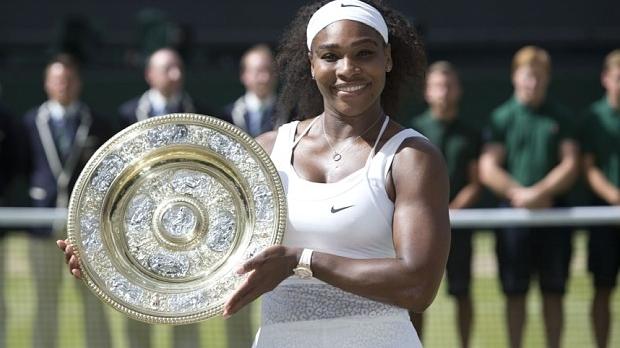 Wimbledon, England (CNN) -- Last year at Wimbledon after exiting to Alize Cornet in the third round, Serena Williams declared: \"I know I can do better.\"

On Saturday at the All England Club came the exclamation point to her turnaround.

Williams defeated promising Spaniard Garbine Muguruza 6-4 6-4 in southwest London to complete the \"Serena Slam\" -- winning four straight majors -- for the second time and is now well on the way to making more history at the season's final grand slam.

\"I honestly wouldn't have thought last year after winning the U.S. Open I would win the Serena Slam at all,\" Williams, emulating her feat of 2002-2003, told reporters. \"It's super exciting.\"

If the American triumphs at the U.S. Open -- and the odds might be stacked in her favor given the 33-year-old is the three-time defending champion -- she would become the first player since Steffi Graf in 1988 to complete the calendar-year grand slam.

A victory would, too, draw the world No. 1 level with Graf on an Open Era leading 22 majors.

It didn't take long, Williams admitted, before New York crept into her mind.

\"I did the whole presentation, I did the whole walk around the court,\" said Williams. \"I was peaceful, feeling really good. Maybe a little after that I started thinking about New York.\"

Her coach, Patrick Mouratoglou, made an early request to U.S. fans to back Williams in September.

\"I think if the crowd helps her, it's going to be a plus,\" the Frenchman told a small group of reporters. \"So of course I expect the American crowd to be the best ever for her because to have an American player like her who is probably the greatest (in) history writing history at the U.S. Open is huge, and I hope the American crowd will be so proud of that that they will help her.\"

One of the keys to her longevity? Freshening up her workouts.

The 21-year-old Muguruza, appearing in her first grand slam final, wept in her chair afterward but shouldn't feel disheartened. It's not very often that Williams loses grand slam finals: She improved to 21-4, last tasting defeat at the 2011 U.S. Open against Samantha Stosur.

Muguruza didn't go away tamely, either, making matters interesting after trailing 5-1 in the second.

The 20th seed won plenty of new fans with her performance at tennis' grandest arena.

\"I don't feel disappointment but you never know how many chances you're going to have to play a final in a grand slam,\" Muguruza, who will move inside the world's top 10, told reporters. \"But if you have to choose who to win or who to lose to, I would choose Serena.\"

Despite the occasion, it was the Venezuelan-born Muguruza who began the sharper.

If she was nervous, she didn't play like it.

Williams, by contrast, struck three of her eight double faults in the first game and was immediately broken, much to the delight of those gathered on Center Court. Muguruza's powerful serve and ground strokes troubled an anxious Williams in the early stages.

One felt, however, it was only a matter of games before Williams awoke, even if Muguruza crushed Williams at last year's French Open.

\"With Serena you have to do everything perfect,\" Mancisidor said. \"So you do something not good, Serena starts playing good and then it gets very tough. But for being in the first final at 21, nothing to (criticize).\"

There was no way back for Muguruza, Spain's first female grand slam finalist in 15 years.

With Williams settling into a rhythm on serve and Muguruza serving second, the pressure took its toll. Muguruza's first double fault at 4-5 set up a set point, which Williams duly converted courtesy of a forehand winner.

Williams tallied 12 aces to give her 42 total in the quarterfinals against Victoria Azarenka, semifinals against Maria Sharapova and final, or the business end of the event.

Williams raced to the 5-1 lead in the second set but finishing off the affair proved difficult. Muguruza saved a match point at 5-3 with a forehand winner after Williams escaped from 0-40 with a barrage of thumping serves. A proud Mancisidor was close to tears.

Perhaps Williams flashed back to last month's French Open final against Lucie Safarova, when she was forced to a third set.

Alas, Muguruza succumbed. Her forehand, the less steady side, produced an error wide on a second match point to end the one hour, 23-minute contest.

Not that Williams knew right away that she had won a sixth Wimbledon crown. She lost track of the score and said she didn't hear chair umpire Alison Hughes utter, \"Game, set and match.\"

Muguruza and Williams hugged at the net before Williams bobbed in delight near her chair.

But the final Saturday at Wimbledon, just like the final weekends in New York, Melbourne and Paris in the last 11 months, belonged to Williams.

\"If you see how much effort it takes to win one (major), to be able to win four in a row is completely incredible,\" said Mouratoglou.

Later Saturday, Jamie Murray became the second disappointed member of his family in the space of 24 hours on Centre Court when he and Australian partner John Peers were beaten 7-6 6-4 6-4 by Jean-Julien Rojer and Horia Tecau in the men's doubles final.

Brother Andy, swept aside by Federer in the men's singles semifinal Friday, watched the match as Jamie could not add to his 2007 mixed doubles triumph with Jelena Jankovic.

And there was a late night treat for the crowd, with 34-year-old Martina Hingis and Sania Mirza winning the women's doubles crown in a match that finished under the lights with the Centre Court roof closed.

The Swiss-Indian pairing beat the Russians Ekaterina Makarova and Elena Vesnina 5-7 7-6 7-5 with Hingis serving out for a memorable victory.