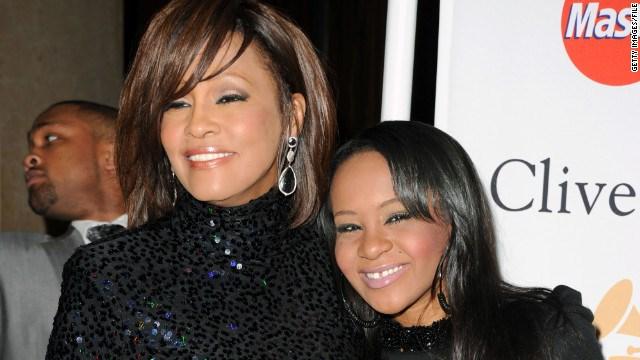 Brown \"was not breathing\" when her husband and a friend found her around 10:25 a.m. at a home in a Roswell subdivision, police spokeswoman Lisa Holland said.

\"They called 911, started CPR on her, and police arrived first,\" the spokeswoman added. \"We took over the lifesaving measures until the fire/rescue and an ambulance arrived.\"

Brown was then transported to Roswell's North Fulton Hospital, where she was breathing, according to Holland.

It was three years ago February 11 that Brown's mother, renowned signer Whitney Houston, was found dead in a bathtub in The Beverly Hilton, hours before she was to attend a pre-Grammys bash there.

An autopsy later revealed that she'd drowned face down in \"extremely hot water\" about 12 inches deep. The Los Angeles County coroner ruled it an accidental drowning with the \"effects of atherosclerotic heart disease and cocaine use\" being contributing factors.

Brown is her only child.

Brown was born in 1993 during Houston's marriage to R&B singer Bobby Brown, which ended in divorce in 2007.

The daughter of music royalty became a public figure during the mid-2000s reality show \"Being Bobby Brown,\" in which she frequently appeared alongside her parents and often had a front-row seat to their marital fireworks.

Mother and daughter even performed together on national TV in 2009, when the two sang \"My Love Is Your Love\" in Central Park on ABC's \"Good Morning America.\"

Given the pair's close relationship, it's no surprise that Houston's death was a major blow.

Days after her mother's body was found, a grieving Bobbi Kristina -- then 18 -- was taken to Cedars-Sinai Medical Center because she was \"overwhelmed,\" family friend Kim Burrell said.

Married a man who was taken in by Houston

As 2012 rolled on, speculation grew over whether the then-underage Brown was intoxicated during episodes of Lifetime's brief reality show \"The Houstons: On Our Own,\" which followed life for the family after Houston's death.

One of that reality show's storylines revolved around Brown's relationship with Nick Gordon, who lived with Houston and her daughter from the age of 12.

And in January 2014, she tweeted out a picture of wedding rings, presumably belonging to her and Gordon, along with the words, #HappilyMarried• SO#Inlove.\"