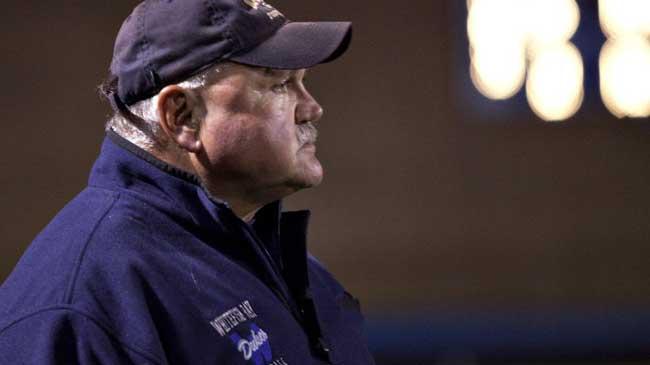 Long-time Whitefish Bay Football Coach Jim Tietjen passed away suddenly on November 30, according to a release from School District of Whitefish Bay.

School counselors were available to students on Tuesday.

According to an email sent to alumni, visitation will take place at the Feerick Funeral Home on Friday from 4:00 to 7:00 PM. The funeral will take place on Saturday at 10:00 AM at St. Monica’s Catholic Church.

In lieu of flowers, memorials may be made in Coach Tietjen’s name to the Blue Dukes Gridiron Club.

“Coach Tietjen was a positive key leader of the Whitefish Bay School community and touched the lives of many of our students, staff and community members,” wrote the School District of Whitefish Bay.

Jim Tietjen was a member of the senior class of 1972 at Whitefish Bay High School.

After graduating he attended UW-Whitewater and earned a teaching degree. He coached from 1985-2014.

The Whitefish Bay Football team made ten playoff appearances including nine consecutive from 2007-2015.

Coach Tietjen earned North Shore Conference Coach of the Year honors three times and was inducted into the Wisconsin Football Coaches Association Hall of Fame in 2014.

“Jim Tietjen was the genesis for the resurgence and the continued competitive success of Whitefish Bay Football.  Opposing teams knew that a game against Whitefish Bay meant they were going to be challenged both physically and mentally and that the Blue Dukes would never back down. Jim’s greatest strength, however was in developing young men that took the lessons learned from football to guide their successes beyond high school.”

“Jim Tietjen generously shared his talents, his time, and his passion with the Whitefish Bay School Community – not only as our Varsity Football Coach, but as a parent, a mentor, a colleague and a friend. Jim was a strong advocate for kids, helping them to realize both their potential as athletes – from those naturally connected to their school and their team, to those looking for a place to belong. Coach Tietjen embraced Duke Pride and was a unifying presence for our team and our fans. Jim’s positive impact was significant and he will be greatly missed.”