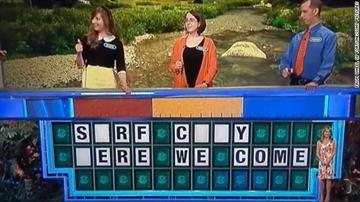 (CNN) -- It might not be the biggest blunder in \"Wheel of Fortune\" history, but it just might be podium worthy.

Recently a contestant named Stephen rang in first during one of the Toss Ups, where one by one, letters are revealed until a contestant buzzes in and takes a guess.

The category was Song Lyrics.

Stephen's guess was \"Surf Clay Where We Go.\" Where? Go? Really?

To which host Pat Sajak said, bluntly, \"Uh, no,\" while probably thinking, \"What the bleep is surf clay?\"

We're guessing Stephen is not a fan of Jan and Dean and not familiar with the classic \"Surf City, Here We Come.\"

TMZ tracked down Stephen, last name Dryer, who told the website that in his rush to buzz in he panicked and forgot the category.

As Dryer pointed out, it's not like he flubbed three puzzles like a student did in April during a college week episode. That man, Julian Batts, even blew one round in which every letter could be seen. He mispronounced Achilles, to the benefit of the next contestant.

We hope they don't run into any surf clay.