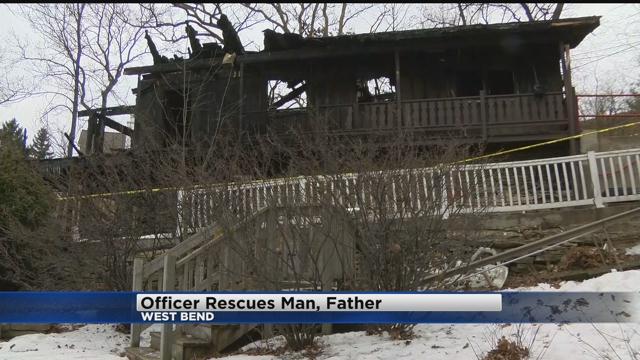 A West Bend Police Officer is being called a hero, after rescuing a father and son from a home engulfed in flames.

The family members and the officer are all doing okay. Police say last night is an example of how an officer's split second decision can save someone's life.

Police say Officer Lee Goodman responded to calls of a fire a shortly after 11 last night.

Officer Goodman found a 52-year-old man inside the doorway of the home.

The man said his 83-year-old father was still in the home.

That's when Officer Goodman went inside and saw that the 83 year had collapsed in the home due to smoke inhalation.

Officer Goodman pulled the elderly man out of the burning home to safety using their personal tram. Neighbors say the flames and smoke were as big as the home itself.

Police said Officer Goodman's actions is why the 83-year-old man is alive today.

"We're extremely proud of our officer today. proud of his bravery while doing his job. we're reminded that across the nation on a daily basis, officers, firefighters, deputies, dispatchers are doing these type of actions to keep our community safe,” said Captain Tim Dehring.

The family and the officer were released from the hospital earlier today.

The home is a total loss, and the cause of the fire is still under investigation.