West Allis man was attacked trying to help a family 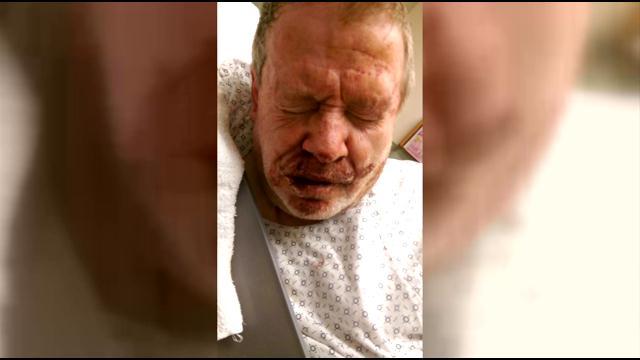 A 66 year-old West Allis man sits bloodied and beaten in a local hospital tonight. His family said all he was trying to do was help.

The man was attacked and beaten Saturday afternoon after reportedly trying to help a woman who's car had broken down.

The son of the victim said his dad was just trying to help a mother.

He's now in the hospital with serious injuries.

Byron claimed his 66 year-old dad Merlin was hit so hard he's in intensive care after helping.

\"A woman with 3 kids was pushing a car down Mitchell, she was trying to turn the corner and she came across his trailer and she started yelling at him to move his piece of crap van,\" said Byron.

He said they started to yell at each other.

Then his dad tried to extend an olive branch.

\"He said look lady, you want help or what? I'm sure after the argument she didn't want his help but he was still trying to help her because he had kids,\" said Byron.

She denied his help and shortly after her boyfriend showed up and hit Merlin.

\"He fell forward face first into the concrete,\" said Byron.

West Allis Police told CBS 58 when they arrived, Merlin told them he did not want to press charges against the 47 year-old man who hit him.

However, his injuries were more serious than they thought.

\"He doesn't know who the president is, what today's date is, where he is, how can you take a statement from him in any capacity if he can't even tell you his last name. He had a brain bleed, so that is why he was moved to intensive care,\" said Byron.

Police have not released a description of the subject.