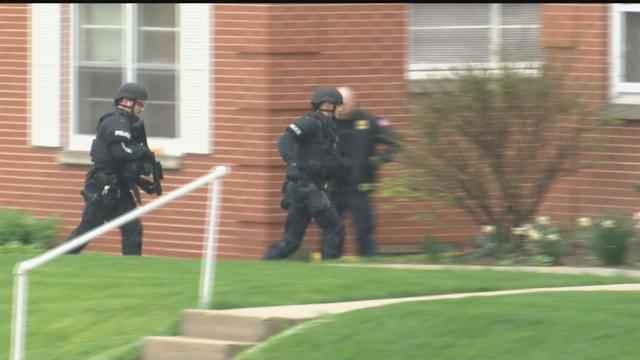 We're learning new information after a man was murdered in his West Allis apartment.

Then officials say the shooter opened fire on an Illinois family in Sauk County before being arrested in Dane County.

Police tell us the three men involved in this crime spree were brothers and neighbors told us at least two of them lived in this building and until this incident were the epitome of good neighbors.

"What they did was terrible and I just can't understand why," said Dianne Buchenauer, who has lived next to the brothers for three years.

A door kicked in, riddled with bullet holes; its what's left after neighbors say early Sunday morning a 20 year old man tried forcing his way into two apartments in his complex and they can't figure out why.

"I never heard any fighting or hollering between the two upstairs and the downstairs one," said Buchenauer.

West Allis police say the suspect eventually made his way into 42-year-old Gabriel Sanchez's apartment, shooting and killing him.

Then, police say he went to Epikos Church.

One of our photographers was inside and was told the man made a threat against one of the pastors.

But it didn't end there authorities confirmed just hours later, that 20-year-old and his two brothers were driving in Sauk County on I-90/94 and shot at a family of four, who were driving back to Illinois after a trip to the Dells.

"The male was passing a Chevy Blazer when the operator rolled down his window and fired three rounds into the vehicle. The Blazer continued eastbound on 90/94 with a witness following it," said authorities.

The passenger, a 44-year-old wife and mother was hit by a bullet in her neck; her husband and children were not harmed.

Authorities finally caught up with the shooter and his brothers on I-94, leading to a high speed chase through Columbia and Dane counties.

They say the suspect got out of the car near deforest, pointing a gun at officers, so they shot him.

All 3 men involved are now in custody.

Police have yet to identify the suspect and other men involved. At last check, the woman who was shot in her neck is in critical condition.