West Allis Jeopardy! champion returns for "Battle of the Decades" 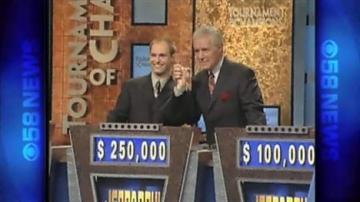 WEST ALLIS-It was back in 2006 that the world first became aware of the brilliance of Michael Falk.

Then a meteorologist with UW Milwaukee he won more than a quarter of a million dollars on the game show Jeopardy.

\"Jeopardy has changed my life in a lot of ways.The best thing is that I was able to buy a house and really put roots down in Milwaukee,\" Falk told CBS 58 Anchor Michele McCormack who traveled to Culver City, California for the show's taping.

Now a math teacher in Elm Grove we caught up with Falk while he participated in the Battle of the Decades which is bringing back champions of the past for a one million dollar prize.

\"I guess for splurges I'd like to get a sports car and take a trip to go scuba diving.\"

For as high as the stakes are, Falk seemed relaxed, even jovial with his competitors, including Ken Jennings who under a new rule allowing champs to return indefinitely went on to win more than $2.5 million.

Falk summed it up this way:

\"I am one of 45 contestants chosen to represent those 30 years which is a huge honor. If I flame out, if I go down in flames, it's a huge honor.  And I'm hoping to do really well.\"