We were sleeping when I shot my wife, Georgia police chief says on 911 tape 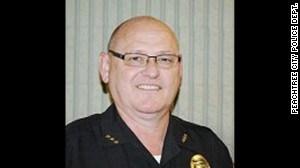 (CNN) -- The police chief in an upscale community outside Atlanta said he was sleeping when he moved a gun in the bed and accidentally shot his wife in the back, according to a 911 tape released Friday.

\"Who shot her?\" the 911 operator asked William McCollom, the police chief in Peachtree City, Georgia.

\"No, everybody was sleeping,\" McCollom said.

Later in the call, the operator asked McCollom, \"Were you asleep also when this happened?\"

Margaret McCollom, 58, was listed in critical condition Friday at Atlanta Medical Center, according to the hospital.

William McCollom, 57, has not been charged with a crime, but he has been put on administrative leave while the shooting is investigated by the Georgia Bureau of Investigation.

He made the call to 911 about 4 a.m. Thursday. He didn't mention he was the top law enforcement officer in the town of 35,000 people until the 1:50 mark in the six-minute recording.

The 911 operator asked where the gun was located. At first McCollom said he didn't know, then said, \"I'm the chief of police. The gun is on the dresser.\"

\"You're the chief of police in Peachtree City?\" the operator asked.

In a statement released Friday, the GBI said: \"Chief McCollom has been cooperating with GBI agents working the investigation. Ms. McCollom will be interviewed when her medical condition improves. When the GBI completes the investigation, it will be turned over to Fayette County District Attorney Scott Ballard.\"

At one point in the recording, the operator asked, \"Is that her crying?\" A woman's moans can be heard in the background.

\"Come on, guys, get here,\" he says while waiting for the police and ambulance. \"Oh my god, how did this happen?\"

When the police arrive, McCollom can be heard telling them the gun is on the dresser. The 911 operator ended the call.

Authorities aren't revealing many details, but said in a Thursday press conference that McCollom shot his wife with his service Glock 9mm.

McCollom told the 911 operator he had shot his wife twice, but the GBI said investigators determined she'd only been shot once.

McCollom was named the police chief in October after being interim chief for three months, reported CNN affiliate WSB.

Peachtree City posted this statement on the city website:

\"City Manager Jim Pennington said, 'This morning, I met with every department manager, and the city of Peachtree City, including the Peachtree City Police Department, is continuing with normal operations.'

Peachtree City Mayor Vanessa Fleisch said, 'Our thoughts and prayers are with Maggie and the McCollom family right now, as we wait for the state investigation to proceed.' \"

Magazines and websites regularly rank Peachtree City as one of the best places to live and raise a family. The community's trademark: Residents putter around in golf carts on the community's 90-plus miles of paved pathways.