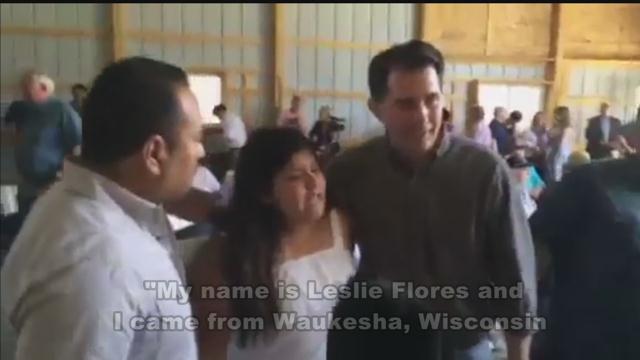 Leslie Flores, 13, traveled from Waukesha to Iowa with her dad Jose and her brother Luis, 7, to confront Governor Scott Walker about his views on immigration and deportation policies Sunday (July 19).

The recorded encounter happened on the campaign trail. Leslie and her family asked Walker for a picture with the intention of questioning him.

\"My name is Leslie Flores and I came from Waukesha, Wisconsin to ask you one question: Why are you blocking DAPA?” she said. Walker responded, “I'm the governor,  I don't have anything to do with that right now but thanks though.\"

Walker walked away. However, his representatives told the family he left in a hurry because he had an interview to get to.

DAPA is a temporary work permit for undocumented parents with children who have legal status in the United States. However, the process is at a standstill due to a lawsuit, which Wisconsin is a part of.

\"My family, I know that they deserve this,” Leslie said. “They are a hard working family and they really deserve this.\"

Leslie's parents are both undocumented immigrants from Mexico and they fear deportation. Leslie said that's why she didn’t give up. She confronted the governor again and he took time to speak with the family about his immigration views.

\"I completely sympathize with the situation you are all in,” Walker said. He was then interrupted by someone who yelled, “So that's why you want to separate their family?”

He told the man he was talking to the family and not him.

“But to me that's exactly why I think we need to go forward with putting a logical system,” Walker said.

Walker criticized President Obama’s policies and what he believes should be done.

\"I want to make sure we have a system that moves forward by securing the borders as I've said before, putting in place a system that enforces the laws and the next president and Congress can move this issue forward,” he said. “But right now I'm not blocking anything, the president has made this issue.”

“I sympathize with it but I want to make sure we follow the law we are supposed to,” Walker said.

Leslie’s family said this is the first time a Hispanic family confronts the governor. Leslie said she’s not satisfied with his response and will continue fighting for her cause.

\"I do have to stay strong and we actually showed a lot people what he actually is to immigrant families.\"

Leslie and her family traveled to Iowa along with Voces de la Frontera, an immigrant rights group in Wisconsin.