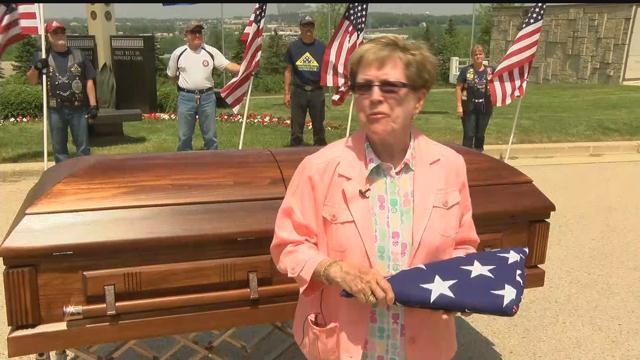 64 years after the plane crash that took the life a Waukesha airman a funeral laid his remains to rest on Wednesday.

It took the Air Force decades to recover and identify the remains of Thomas Condon - who was buried today St. Joseph's Cemetery with full military honors.

His final resting place is far from where he died on November 22, 1952. That was in Alaska during a snowy plane crash on a glacier. Condon died with 51 other people headed to Elmendorf Air Force base.

The funeral is the second memorial for Thomas Condon who grew up around the Waukesha area and died at 19.

The first memorial was 64 years ago and had no body and no remains.

That's what the family had to accept until "Operation Colony Glacier" which sent military personnel to look through and identify remains after the crash site became accessible.

"They gave [the flag] to bill but he had the flag from 1952. So he gave it to me which I'm very grateful for," Marian Atkinson, Thomas Condon's younger sister, said.

Condon is 1 out of the 25 people identified from that crash so far. The family tried to schedule the funeral as close to Memorial Day as possible.

"That was intentional. And I thought it was a tribute to all the veterans," Atkinson said.

Thomas Condon's family including his younger brother Bill Condon had to submit a DNA test to the Air Force in order to confirm they had the correct remains. First contact was made with the family in 2014.

Testing is still going on with other remains.