Walmart to Marine Collecting Toys for Kids: Step Outside 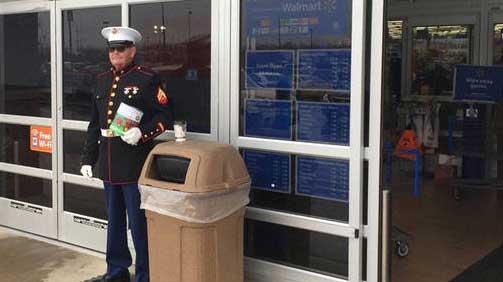 MEDINA, Ohio - For nearly 15 years, former active-duty Marine John Harkness says he's been allowed by the Walmart Supercent in Medina, Ohio, to stand inside and collect toys and money for Toys for Tots, a foundation backed by the Marine Corps which provides toys to underprivileged children.

But this week there was a change.

"They made us stay outside," Harkness told CBS affiliate WOIO. "We're there to collect toys for children that need a Christmas."

When shopper Mary Murdock saw Harkness standing in the cold while she was shopping, she was outraged.

"I just said, why can't they put you inside? This is crap," Murdock told WOIO.

A photo of Harkness posted on Facebook, captioned, "He can bleed and die, but he can't stand inside," began going viral -- as did the social media outrage. Some even called for boycotts of Walmart.

Walmart released a statement stating that its corporate policy does not allow people to solicit donations inside its stores.

"If a Marine or anyone was treated with disrespect, that is unacceptable and we are looking into this matter further to get the facts," Wamart said, adding, "Walmart's corporate policy across our more than 4500 stores does not allow this type of solicitation inside our stores and we apologize for any confusion about this policy."

The policy is not exactly new: In 2000 Walmart announced charities would not be allowed within its stores (including vestibules) to solicit funds or gifts. The Salvation Army, Boy and Girl Scouts and other groups holding holiday fundraisers were told no.

The Walmart spokesperson said the current store manager in Medina is new this year, and that if Toys for Tots was allowed inside in years past, that actually broke the rules.

The policy is being enforced elsewhere: CBS Affiliate KTVN in Reno reports that local Walmart stores in Nevada have removed Toys for Tots donation boxes from their locations, too.

"It sounds like a type of a decision a business like Walmart would make," shopper David Richards told KTVN.

While Harkness is hopeful for a change in policy for his Toys for Tots station, he is thankful for all the support he has received, including strangers he bring him coffee and sandwiches as he asks for donations outdoors.

"It's encouraging, it's fantastic, and it's good to have the general public -- veterans and non-veterans -- support you," he said.

"It takes two seconds to do the right thing when it's cold and rainy and holiday season. You can put them in there," said Murdock.