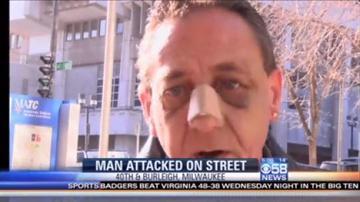 MILWAUKEE -- 53-year-old Tim Besset of Milwaukee is home from the hospital after he was randomly attacked by four teenagers near 40th and Burleigh streets Monday evening, leaving him with a broken nose, broken bones in his face and dark bruises on his eyes.

Similar \"knockout game\" attacks have been videotaped and posted on websites like YouTube. Besset says he has no doubt that's exactly what happened to him, but lawmen and local elected officials are using different terms.

Milwaukee County Sheriff David Clarke says, \"It's not a game. I'm not going to use that. These are violent, vicious attacks, unprovoked, cowardly. I'll refer to it as that.\"

Milwaukee Alderman Bob Donovan said, \"It's frustrating that individuals would behave like this. It almost makes a simple robbery virtuous.\"