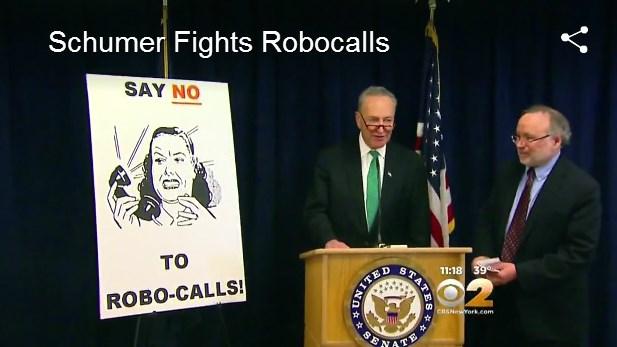 “Every one of us has been seated at dinner with the family or in the middle of an important conversation and been annoyed by these robocalls,” Schumer told WCBS 880. “I helped pass the ‘Do Not Call’ list in 2003, but the technology of the robocallers has gotten around some of that legislation, particularly when it comes to cellphones.”

Schumer said blocking technology can send an automated telemarketing call to a spam box, much like email spam-blockers do.

“Today, I am asking all of the phone companies – whether they have landlines or cellphones – to make that technology available to consumers for free,” Schumer said.

Schumer said despite the “Do Not Call” rules, hundreds of thousands of people continue to receive unwanted telemarketing calls.

The Consumers Union says there were 305,000 complaints about Do Not Call violations in September 2014.

In addition to annoying calls from mortgage companies and credit cardfirms, robocalls can subject phone customers to scams. Schumer noted the recent robocall tax scam that told victims they owed money to the IRS.

“A good number of the robocalls are scammers. They prey on senior citizens and others and persuade them to part with thousands of dollars, and if we were to end those robocalls, scammers would be put out of business as well,” Schumer said.

Time Warner Cable has announced it will provide its phone customers with access to Nomorobo, a robocall-blocking service.