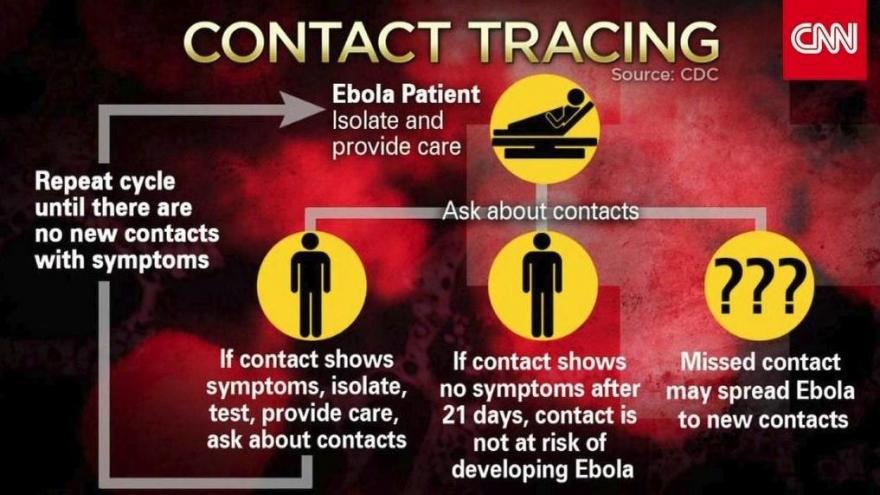 (CNN) -- The partner of Ebola patient Thomas Duncan is quarantined in her Dallas apartment where Duncan became sick with the virus after his trip to Liberia, the woman told CNN's Anderson Cooper.

The woman, who asked to be identified only by her first name, Louise, is quarantined with one of her children under 13 and two nephews in their 20s because they were in the apartment when Duncan became ill, Cooper said Thursday.

Duncan, a 42-year-old Liberian citizen, is in serious condition in a Dallas hospital, a spokeswoman said Thursday.

But Louise remains in her apartment, and she's worried, not knowing what to do and waiting on federal health officials, Cooper said. She and her family will be quarantined for 21 days, and she's frequently taking her family members' temperatures as well as her own.

\"She doesn't know how she's going to get food into the apartment. She was told she said maybe the Red Cross would come by. She's still waiting for that,\" Cooper said.

\"Some health officials brought sandwiches last night, but she hasn't had anything today,\" Cooper said. \"She's certainly kind of at loose ends and is obviously extremely worried.\"

Louise, a caregiver, sometimes refers to Duncan as her husband and sometimes as the father of at least one of her children, Cooper said. \"They're not legally married, but they clearly have some sort of relationship,\" Cooper added.

Later in the day Thursday, officials were delivering food to Louise and her three family members, who are being confined under a quarantine order, said Dr. David Lakey, commissioner of the Texas Department of State Health Services.

The apartment is being monitored with local law enforcement, Lakey said.

Dallas County Judge Clay Jenkins, who's among local officials addressing the Ebola crisis, said that at one point, Louise and her family especially \"were noncompliant with the request to stay home.\"

As of Thursday, the family members weren't showing symptoms of the Ebola virus, officials said.

\"We have some hygiene issues that we are addressing in that apartment,\" Jenkins said. \"Those people in the apartment are part of Dallas County, and they're going to be treated with utmost respect and dignity in this unusual situation.

\"We are working to get the response, which has been a good response, strengthened every hour of the day,\" the judge said.

Dallas Mayor Mike Rawlings acknowledged other problems outside the apartment building, blaming the media and saying \"it is as best disorganized out there.\"

The city has embedded police at the apartment complex \"to make sure there is calm,\" the mayor said.

How the Ebola virus spreads

Sheets and towels used by Duncan still in apartment

The Dallas apartment where Louise and her relatives are quarantined.

Despite the close contact, Louise \"does not feel that she came into any contact with any (bodily) fluids\" from Duncan, Cooper said.

\"She says he didn't vomit on her. She wasn't cleaning up after him. She said he was very much sort of prideful, would take care of himself, go into the bathroom when he had diarrhea,\" Cooper said.

Louise and her family are in isolation with sheets and towels used by the Ebola-stricken Duncan, Cooper said. Louise did use bleach to clean her apartment, \"but it's not clear to me how systematic the cleaning was,\" he said.

The sheets used by Duncan were still on the bed, and the Centers for Disease Control and Prevention hadn't taken away those materials as of Thursday morning, Louise told Cooper.

CNN's Dr. Sanjay Gupta said the continuing presence of the sheets, on which Duncan may have transmitted the virus through sweating, are disturbing.

\"With the sheets still being on the bed, that obviously is a concern,\" Gupta said. \"We've talked about the fact that this virus can live outside the body, can live on surfaces. It's unlikely for it to be transmitted to someone else that way.

In the wake of Louise's revelations about Duncan's sheets and towels, a medical waste contractor was on its way to her apartment Thursday, a CDC official said Thursday.

He did not explain why the contractor is on its way only now, as Duncan left the house many days ago.

Ebola patient Thomas Eric Duncan in a photo from his Facebook page.

Wilfred Smallwood, Duncan's half-brother, said his 21-year-old son is among those quarantined in Louise's apartment.

\"He lived there with them, too,\" Smallwood said Thursday of his son. \"I just talked to them this morning -- the woman and my son and all of them.\"

His son told him that \"we all be OK,\" Smallwood said.

Duncan came to the United States for the first time September 20 so that he could \"help his son\" and visit his family, Smallwood said.

Smallwood said he became disturbed when told of Louise's accounts about the his brother's sweat-stained sheets in the apartment and the lack of food.

Lakey, the Texas health commissioner, also said a crew will be cleaning and sanitizing the apartment.

Nonetheless, Gupta expressed alarm about the belated visit by the CDC waste contractor to Louise's apartment.

\"It is hard to believe (the oversight) and there aren't good explanations here,\" Gupta said.

One Ebola expert, Dr. Alexander van Tulleken, also said the federal response to the first Ebola case on U.S. soil seemed troubling. \"So far we don't seem to reacting as well as we could,\" he said.

About Louise and her family, van Tulleken added: \"It doesn't sound like they're being looked after at the moment.\"