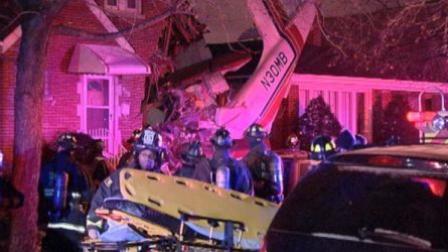 A small plane has crashed into a home near Midway Airport in Chicago, killing its lone pilot. The Chicago Fire Department reports the plane crashed near 65th and Knox Avenue just before 3:00 a.m. The scene is just southeast of the airport and only a quarter mile from the end of Runway 31C.

Fire officials say two elderly residents escaped the home without injury. A neighbor helped pull them out. Many of the streets nearby were blocked off.

According to WBBM-TV in Chicago, the plane had one pilot aboard and no passengers. Rescue crews spent hours trying to get inside the house, which was deemed unsafe. Eventually firefighters were able to enter and located the pilot's body. Two homes next to the crash scene were evacuated. Fortunately, no fire or fuel leak was reported.  The pilot has not been identified.

The FAA says the plane took off from Midway Airport bound for Chicago Executive Airport in Palwaukee, but the pilot reported engine troubles just after takeoff. The plane is an Aero Commander 500, a small two-engine craft. The plane, with a tail number of N30MB, was registered to Central Airlines Inc. out of Fairway, Kansas.

Investigators from the FAA and the NTSB will investigate the crash. Air traffic at Midway Airport was not affected.