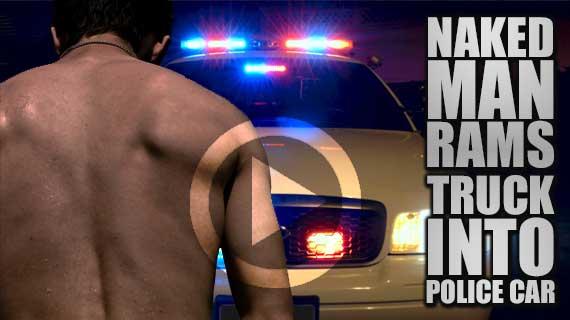 UPDATE: As of 1:20 PM the man, who struck his Ranger into the Waukesha squad cars, remains in the hospital. He has not been charged yet, but the District Attorney is reviewing the case.
A naked man rammed his Ford Ranger pick-up truck into two Waukesha Police Department squad cars at about 7:45 PM on West Newhall Avenue.
The two officers were meeting in a parking lot off the road.
\"I truly believe that if this guy had come five seconds later they would've been dealing with a double fatal at that point,\" said Captain Ron Oremus, Waukesha Police Department.
After ramming the officers, the driver backed up and fled the scene.  Officers pursued and, at one point, the suspect lost control of his vehicle and spun out in traffic so that he was facing the on-coming squad car.  The suspect then rammed the side of the officer’s squad yet again before continuing to flee.
The suspect had gained some distance from the officers, but eventually lost control as it appears he attempted to turn into a vacant parking lot off of Progress Avenue and struck a fixed barrier.  As he did so, the pick-up truck rolled and was totaled.  As officers arrived at the crash scene, the naked suspect can be seen walking away from the truck.  The suspect was either ejected from the vehicle during the roll over crash or he immediately exited as officers arrived on scene.
The suspect was taken into custody after a less-lethal munition was deployed.
\"We feel very fortunate that no officers were injured in this incident.  We also believe two Carroll College employees were incredibly lucky to escape with their lives as the truck was less than 5 seconds from a head-on collision with them in their 6 wheel ATV,\" said Captain Ron Oremus.

After the pursuit officers were concerned, given the suspect’s bizarre behavior, and wanted to ensure he did not harm anyone prior to the pursuit.  Officers responded to the subject’s known residence and learned that the suspects girlfriend provided the drugs to the suspect and when he went to leave the apartment naked she tried stopping him and he punched her in the face.

The suspect was believed to have taken LSD and have been involved in a domestic dispute just prior to the incident.
The suspect is currently hospitalized with non-life threatening injuries which include soft body tissue injuries as well as significant broken bones and injuries to his face believed to be caused by the crash.
Share this article: