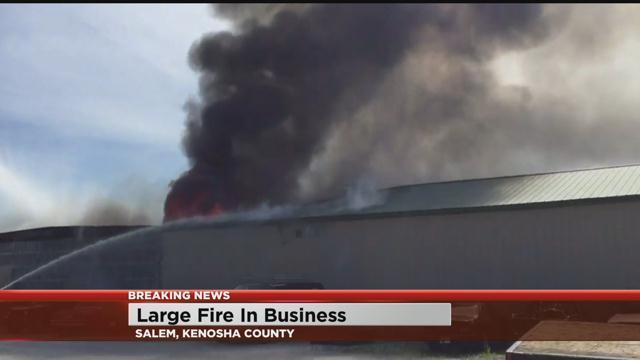 A transmission business declared a total loss by the fire chief after a large and fast moving fire Wednesday afternoon.

The Salem Fire chief says they struggled to get water on the fire because there isn't one fire hydrant on the property along Wilmot Road in the Salem Business Center.

They resorted to transporting some 2,000 gallons of water to and from the Fire House.

12 local department turned out to help the Salem crews, almost all of them volunteers.

It took 14 tanks and dozens of trips to the fire station to put the fire out.

One firefighter was taken to the hospital and should be okay.

"There was quite a lot of water," Chief Mike Slover told CBS 58's Amanda Porterfield. "Big fire load. We tried to stop the fire. We failed at stopping it  from spreading . Once we got water set up we were able to extinguish the fire."

The building were the fire began was being used for storage. It also had a small transmission shop inside.

No word on a cause.

The Chief added that the building has no fire walls or any preventative measures in place.

Images and video are provided by both Kenosha News and CBS 58.