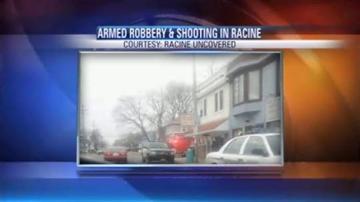 RACINE-A customer was shot at during a robbery  16th Street Foods  Monday afternoon.  Police have two suspects in custody as of Monday night.

A young suspect was also shot and taken into custody at another convenience store just down the street called Twins Food.  He apparently shot himself in the leg.

Police say they have a juvenile in custody  and that his wound is in the leg.

The customer was apparently shot in the chest.

The store owner had a gun put to his head.  His wife says it's upsetting something like this would happen.

\"Preliminary investigation indicates that two masked suspects entered the store and ordered workers and patrons to the ground. In the process one patron was shot in the chest. The suspects fled the scene.

While officers were on scene, they received information that a party with a possible gunshot wound to the leg was outside of Twins Food Mart 1800 blk of 16th St. Officers responded to that location and quickly located the injured party who was transported to Wheaton Franciscan for treatment. That individual, a 16 year old juvenile, has been taken into custody in connection with the armed robbery/shooting investigation. An adult male has also been taken into custody reference the investigation.

Both the 40 year old victim and the 16 year old suspect were treated for nonlife threatening injuries.

The investigation is active and no further information will be released at this time.

Racine Police investigators are interested in any additional information that you may have about this crime. You are urged to call the Racine Police Department Investigations Unit at 262-635-7756.