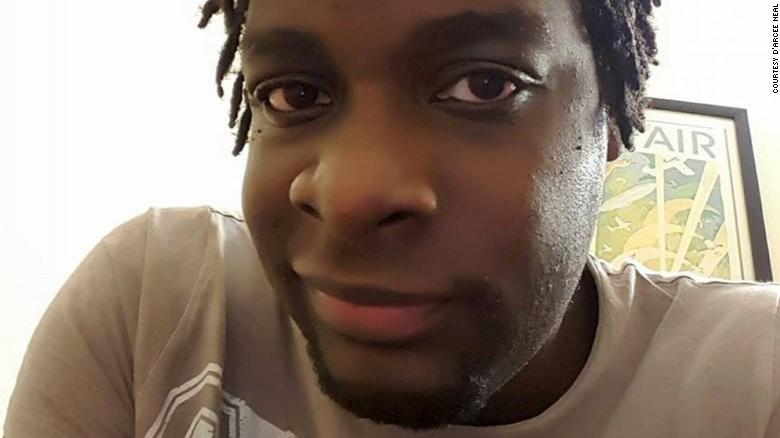 (CNN)A man returning from a meeting about disabled accessibility policies arrived home with a very personal example of the problem.

D'Arcee Neal, who has cerebral palsy, took a five-hour flight from San Francisco to Washington last week. A mix-up at the gate meant there was no wheelchair to help the 29-year-old off the plane, so he was told to wait for one to be found.

The problem was Neal needed to use the restroom. His disability made it too difficult to use the one on the plane. He had already waited more than 15 minutes for the rest of the passengers to disembark, and the wait for an aisle chair -- a narrow, specialized wheelchair to take disabled passengers down the airplane aisle -- had now lasted another 15 minutes.

"I was trying to get them to understand that this is why I don't want to wait another 15 to 20 minutes," Neal said.

After being told repeatedly to wait, Neal said, he couldn't any longer. He said he got out of his seat and as the flight attendants watched, he crawled his way up the aisle and to the gangway, where a wheelchair was then ready.

"I expected them to ask to assist me, but they just stared," he said.

A United spokesman said an aisle chair was at the gate when Neal's plane arrived but removed by mistake before it was Neal's turn to disembark.

"As customers began to exit the aircraft, we made a mistake and told the agent with the aisle chair that it was no longer needed, and it was removed from the area," the airline said in a statement. "When we realized our error -- that Mr. Neal was onboard and needed the aisle chair -- we arranged to have it brought back, but it arrived too late."

Neal worked for years as a disability advocate for nonprofits and now works for the federal government. He was in San Francisco for a meeting with the car-hire company Uber to discuss accessibility policies.

After the incident, he said, he simply went home.

"I didn't contact United at all, because I honestly didn't believe they cared," he said.

As it turns out, Neal said, one of the flight attendants later felt sorry about the incident and reported it to the company. A United representative called Neal the day after the flight to apologize.

"Quite frankly, I was just shocked, because this had happened a couple of times before (with various airlines), and no company had ever bothered to apologize when they've done something wrong," he said.

The representative told Neal the manager on duty was suspended. He also offered Neal $300 in compensation, which Neal says he accepted.

Neal said he is pleased with the airline's response. He says he never made a complaint, and his story only drew attention because he posted on Facebook that he was happy United reached out to him.

"I just hope they learn from this," he says.

United says Neal's experience "doesn't reflect the level of service we provide to customers with disabilities each day." The airline says it has a 24-hour disability desk to answer questions and arrange special assistance.

"Our employees -- particularly our flight attendants and airport staff -- are happy to arrange additional assistance for customers with disabilities on the day of travel," the airline says.

Since the incident, Neal said, he has been contacted by people trying to file class-action lawsuits against the airline industry for problems with disability access. He said he's not sure he'll join them, but it's worth considering because he believes the industry needs to "take a hard look" at their policies.

"This might be a good step to shed some light on the problem," he said, "and I hope to continue to advocate for this."